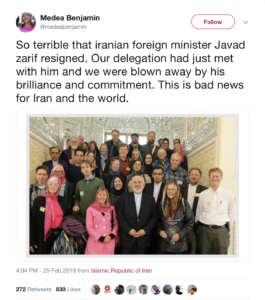 The Iranian government asked Foreign Minister Javad Zarif to meet with the group when it arrived since the delegation went there to express solidarity with the repressive Iranian government & not to meet with dissident political groups opposed to theocratic rule & to Iranian military intervention in Syria. February 25th was the day Assad was on a state visit to Iran. Zarif (who has been Foreign Minister since 2013) was miffed that he was excluded from that meeting & forced instead to meet with a group of half-baked groupies from the US. So he resigned that very day. (It was a stunt on his part & Iranian president Rouhani refused to accept the resignation.)

Upon his resignation, Benjamin tweeted her high regard for Zarif. High regard for a man described by most sources as a sleezeball? A man who defends, without blanching, all the excesses of the Iranian government, including ordering women what to wear, repression of Kurds, arrests of journalists (46 currently in jail in Iran), persecution of homosexuals, & worst of all, military intervention against the Syrian Arab Spring? Of course the Code Pink delegation fully supports the Assad regime & Iranian & Russian intervention in Syria. It’s a surprise they didn’t beg to also meet with Assad so they could kiss his ass too.

Code Pink has substituted the politics of spectacle & grandstanding for building a mass social movement to oppose the several US wars. Not rooted in movement democracy, it has lost its bearings completely when it forges links with repressive regimes under the imbecilic rubric of “regime change operations” & does not stand with the people of Iran & Syria. Shame on Code Pink as they limp at a steady pace into oblivion.