Maybe it’s a generational thing, since my generation is so close to WWII, maybe it’s disguised anti-Semitism, but too many minimize the Nazi holocaust of Jews, Roma, Sinti, disabled, gays, socialists, communists. There were concentration camps, mass starvation, mass graves, gas chambers. It was the savageries of colonialism brought back to the metropolitan centers. It is not invidious to compare Israel & India in their actions toward Palestinians & Kashmiris but this does not mean what Jews & others suffered was not absolutely monstrous.

Assad propagandists are so detestably dishonest. Mint Press had the headline “Utter silence: that was the sound of Western corporate media following a UN panel on the White Helmets in December.” RT (wholly owned by the Russian government) published an article by fascist Eva Bartlett titled “Organ theft, staged attacks: UN panel details White Helmets’ criminal activities, media yawns.” That so-called “UN panel” which is available to view on YouTube was a group of Russian diplomats & their flunkeys with ‘experts’ like fascist Vanessa Beeley testifying in a rented room at the UN that the White Helmet rescue workers are a terrorist front engaged in organ trafficking. Of course media was silent about it. It was arrant propaganda & bullshit.

“We are not the zoo animals and you are not our ring masters.
Stand against this injustice (Convoy Terror).”

–Tahir Khan Hamidi on the Indian military shutdown of a main highway in Kashmir.

An article about Rohingya refugee Ziaur Rahman who was a victim of human traffickers:

This is another story about the Spanish fireman Miguel Roldán who faces 20 years in prison because Italian authorities have accused him of aiding human traffickers after he helped save thousands of African refugees from drowning in the Mediterranean.

Most African refugees try to make it to the island of Lampedusa in the Mediterranean (part of Sicily) where there is an immigrant intake shelter. There have been several protests by refugees at the shelter since the management company that runs it for the Italian government engages in abusive practices, including squalid, dangerous, overcrowded living conditions. Over the past 20 years, an estimated 400,000 people have crossed the sea from Libya to Lampedusa. Some estimate that 15,00 have died trying. Other estimates are well over 25,000 but no one knows for sure because African lives don’t matter; there is no monitoring agency that counts the number who board ships & the number who land safely.

In 2013 there was a notorious incident where the Italian Coast Guard allowed 366 refugees to drown just off the coast of the island while fishermen attempted to save them. The woman mayor of Lampedusa & most of the 6,000 residents vociferously disagree with Italian government policy & volunteer food, blankets, medical care, sleeping space to refugees. In a 2012 open letter to the EU protesting its refugee policies, Lampedusa mayor Giusi Nicolini said, “If these dead are only ours, then I want to receive telegrams of condolences after every drowned person I receive. As if he had white skin, as if he were our son drowned during a holiday.”

Many search & rescue operations port in Lampedusa & local fishermen continue to rescue refugees off the coast. Under current Italian government & EU policy, they could be charged, like Miguel Roldán, with human trafficking.

Another article elaborating how the Indian military closing of a main highway in Kashmir on Sundays & Wednesdays is an instrument of oppression & occupation.

Headline in The Kashmir Monitor: “Highway closure: Anantnag family gets permission to use road but wedding party will be frisked first.”

Doing the tango is the least of bird charms. They are an intelligent, emotional animal meant to fly & never should be held captive in a cage.

This article is about Indian occupying forces closing down a main highway in Kashmir on Sundays & Wednesdays to facilitate the movement of troops & materiel. Kashmiri activists have plenty to say about this because it egregiously violates the free movement of Kashmiris for commerce, emergency vehicles, funeral & wedding processions, traveling, visiting. 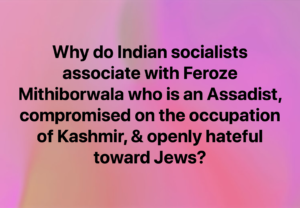