The sarcasm that Kashmiris so constantly employ against occupation & that so many Muslims around the world use in their resistance to Islamophobic laws, confirms in spades that satire is the genre of the oppressed. In the hands of the oppressors, sarcasm is nothing more than ridicule, humiliation, & stinking elitism. But in the hands of those resisting war, persecution, occupation, genocide, it is brilliant, defiant, liberating.

“A Muslim man was not lynched but made to eat pork, be thankful and vote for the sanghi terrorists.”

–Muheeb Sharief on the upcoming general elections in India

Madonna’s public relations firm confirmed that she will perform at the Eurovision song contest in Israel next month. To break the BDS cultural boycott of Israel, she is reportedly getting paid $1.5 million for two songs. Not just ‘the material girl’ but the apartheid girl shilling for genocide.

“Thinking loud : It is true that the whole political class in india endorses occupation of Kashmir, however the saffron variety displays extreme, rabid, hatred against Kashmiri Muslims. Some Kashmiris argue that if BJP comes to power again, it will bring about the disintegration of india and therefore might hasten the freedom of Kashmir. This should not be misconstrued as support for fascism in india, Kashmiris are in no way able to impede or bring BJP to power in India. It is an assertion reflective of a people pushed to the wall with naked cruelty, indignity and extreme oppression. In my opinion coming of BJP to power again will be disastrous for the struggle of Kashmiris, regional peace and also for marginalised people in india. Though the cancer of hatred, ignorance and prejudice prevalent in india, which makes BJP possible, may take a longer time to cure, but for the sake of whole humanity, peace and our already difficult struggle may BJP lose, irreversibly.”

–Mir Laieeq on the upcoming general elections in India 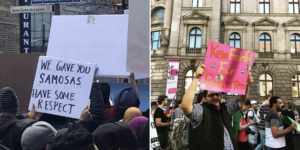 Left: “We Gave You Samosas, Have Some Respect”, Sikhs protesting Quebec’s secularism law that will prohibit wearing religious symbols in the workplace.
Right: “No Falafel for Racists!”, Free Syria block during Berlin mass rally against racism and hate.”

There was a time on Facebook when many of us got involved in knock-down-drag-out political fights, some of which went on for days. We sharpened our polemical & repartee skills but exhausted ourselves trying to persuade others to adopt our point of view. It was very much like family reunions, with liberal & conservative relatives, writ large: a hell on earth of indigestion. From this experience, I have developed the pearl of wisdom that one of the arts of politics is learning when to save your breath. It’s a truth I live by now when someone tries to lure me into one of those long-winded disputes. It’s better for one’s health & sanity to concentrate on building solidarity with the oppressed rather than debating those who find that the status quo of injustice suits them just fine.

When Bernie Sanders aggressively campaigns against open borders & calls for ‘comprehensive immigration reform’, he’s trying to pulling a fast one on his liberal & oh-so-gaga socialist supporters. Comprehensive immigration reform is a day late & a dollar short when there are tens of thousands of refugees encamped on the US southern border, including thousands of little kids, unable to enter the US & when there are thousands in US concentration camps, including thousands of kidnapped children, arrested for trying to enter the US. What about them? Don’t their rights matter? Some of those refugees, like Haitians, have preferred immigration rights under US law allowing them to enter the US which the Trump regime is denying them. What about them?

Would champion of the people Bernie Sanders turn away tens of thousands of refugees because he is so busy campaigning that he hasn’t gotten off his ass to propose ‘comprehensive immigration reform’? Are they supposed to just trudge 1,500 back home because his being president is more important than their humanity? Will his supporters please smarten up & stand with refugees rather than with another windbag promising the stars at the expense of the ‘poor, unskilled workers’ Sanders is so afraid of?

Accepting the Muslim-hating ideology of the ‘war on terror’ means pogroms & assaults like this in India, massacres like in New Zealand, fetishizing & outlawing the scarf, & supporting the bombing of civilians in Syria & elsewhere.

This is a very important article on the mass rape of women & torture of men at Kunan Poshpora, Kashmir in February 1991–for which there is still no justice. Kashmiri feminists along with Mayan women in Guatemala have played a leading role in educating about & campaigning against the use of rape as a weapon of war, occupation, & genocide. 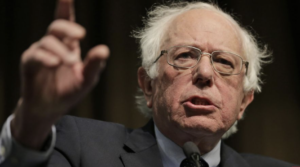 Jacobin magazine, which positions itself as the thinking socialist’s journal, has published several useful articles explaining & promoting open borders. It is also campaigning for Bernie Sanders in the 2020 elections. Since they’re such smarty-pants, they should elaborate how they can advocate for open borders while going gaga for a candidate vociferously against them because, according to him, it would allow too many ‘poor, unskilled workers’ into the US, undercut the wages of American-born workers, & undermine the nation-state? Classic xenophobia stuff, classic white supremacy, classic pandering to rightwing voters. Also detestable elitism & upper-class snobbery. The only way Sanders doesn’t sound like Trump is that he doesn’t claim those hordes of ‘poor, unskilled workers’ are criminals & terrorists from the Middle East.

Indistinguishable from Trump, Sanders has been railing against open borders since the 2016 election campaign calling them a “right wing, Koch brothers proposal.” He repeated this rubbish while campaigning in Iowa this weekend. Insistent in saying he is “absolutely opposed” to open borders–what some of us call immigrant & refugee rights–Sanders pulled a Hail Mary pass by calling for ‘comprehensive immigration reform’. Good for him. Has he ever defined what that means? Has he ever proposed a program for such reform in the US Congress? Would such comprehensive reform include stopping US corporations from developing the sweatshop economy at the expense of those ‘poor, unskilled workers’ in other countries? Or is Sanders, like a true xenophobe, only concerned about the wages of native-born workers?

It is US corporations that are undermining the wages of working people in other countries through the sweatshop economy. It is US, European, Chinese, Japanese, Indian corporations imposing neoliberal policies in other countries that force millions to move elsewhere. The problem is not ‘poor, unskilled workers’ from other countries & the solution is not pandering to xenophobia among American voters. If Sanders wants to protect the wages of workers, he needs to engage in union-building & organizing so that immigrants cannot be used in a divide & conquer chokehold. He needs to propose legislation stopping corporations from using sweatshops against workers in other countries. But mostly he needs to help break the hold of the Democratic Party over the US labor movement because that party has consistently sold workers down the drain for the past 150 years. You’d think a so-called socialist magazine would understand that. Or are they getting caught in their own contradictions? It’s a hard lesson to learn, but you can’t have it both ways in politics. You can’t play both sides of the street. The dialectic doesn’t work that way: to justify betrayal. Either you stand with working people, regardless of their immigration status, or you stand with the corporations.

(Photo of Sanders by Seth Wenig/AP)