A long time ago, a Kashmiri police officer sent me a friend request. We had several mutual friends but when I’m reading report after report of Kashmiri police attacking protesters I’m not interested to going all buddy-buddy with one of them. Every once in a while, I’d look at his request & wonder if I was being intolerant; just maybe he was one of the good guys. But he’s in a command structure & if they tell him to hunt down protesters, he has to follow orders. I went looking to finally delete the request but he must have pulled it back. There’s a new Modi sheriff in town & it might not be good to be my friend when India wants me thrown off social media.

“If Indian police can storm a university in the capital; thrash and sexually assault students without a care in the world, imagine what has been going on in Kashmir where 700,000 soldiers, paramilitary & police have permission to operate with impunity amid an Internet blockade.”

The important political role of Kashmiris living outside Kashmir has never been more apparent. We haven’t always understood how vital their role is in educating about their struggle & in building a solidarity movement. They are a living link to those Kashmiris not allowed to speak for themselves & who we still miss dearly. Let me say again, for the umpteenth time, that Facebook is like a ghost town without their insights, polemics, ironies & wit.

Regarding India legalizing the persecution of Muslims, one Kashmiri said: “They were looking for the Gujarat model; they ended up with the Kashmiri model.”

There are so many incisive & brilliant comments made by so many Kashmiri & Indian friends about the protests in India that they should be collected as part of the historic record. Makes me confident in my senior years that hope & commitment to resistance against injustice & inequality remain strong. 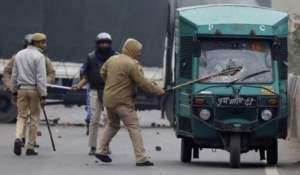 “Those who are creating violence can be identified by their clothes itself”.

–Modi on the protests against the Citizenship Act & NRC

This is an important post by Kashmiri Amir Malik about Indian protesters who are decidedly not drawing the right conclusions from the legal exclusion of Muslims & from the violence against their protests:
—
“Some non-serious pages on facebook apparently against amended Citizenship Act and some individuals have said “the police dealt with us in such a way as if we were terrorist”. Some even said, “we are not Kashmiri,” they added.

These kinds of statements are condemnable as they carry Indian state’s line. Besides, they also justify state’s brutality on innocents whom it frames as terrorists.

The second set of statement which says “we are not Kashmiri” is far more dangerous. It justifies army’s brutality on a civilization, entire population.

Indians getting a few bruises here in Delhi is bad, really very bad. But, those who have not lived under occupation have no idea what Kashmiris go through every day. They pay with their blood. You got to stop saying “this is not Kashmir”.

On how you can avoid making these kinds of statements, a little suggestion– avoid comparing your tragedy with that of Kashmiris or “terrorists”. Say what happened to you was brutal. And should not have happened.

How can you justify state-terror unleashed on “Kashmiri” or “terrorists” or “Maoist”. While speaking against police brutally on you, when did you become so brutal?”

“I am simply amazed by the adults sitting in safe spaces branding students as violent creatures when every photograph and video shows who’s holding the firearms, the lathis and the tear gas. What perfumed incense are you inhaling that’s making you take leave of your basic senses, let alone your rational thinking? Or do girls wearing head scarves pointing a finger at the cop mercilessly beating up their friend scare you? Can you be any more of a coward in this lifetime?”

Let’s hope the strong, prominent, & fearless role women are playing in social struggles around the world is being documented & that those struggles will produce women historians. Women have always played a prominent role, sometimes the primary role, in social struggles. If we don’t have documentation & women historians to record our present role, we’ll be written right out of history like women were before the rise of feminism in the 1960s. The historic method of exclusion is a way of undermining women’s respect for each other. This is not an anti-man statement. It’s an assertion of the right of women to be respected for the role we play in making this world suitable for human beings to live in. For heaven’s sake, we started by developing agriculture & now we’re fighting to keep our kids from being jailed, tortured, murdered or our friends from being beaten with truncheons. Respect is long overdue.

A well-known Assad propagandist named Sarah Abed posted an article from Russia Insider, a publication of American ex-patriates living in Russia which is openly anti-Semitic, racist, Assadist. They might not aptly be called Stalinist since they are also openly pro-czarist but the distinctions between Stalinist & czarist rule were often indistinguishable. It would not be too much to characterize them as fascist. It’s hard to distinguish between those ideologies these days since they are massively converging. In the discussion, Alexander Reid Ross (who has written important exposés about Assad propagandists) dared to enter & point out that “Russia-Insider is a fascist publication that traffics in pro-Assad propaganda & antisemitism.” One of Abed’s followers responded, “Sometimes this is the only effective resistance people have against Zionist occupation.”

Consider the political vision that would posit fascism as an effective counter against the rightwing colonial ideology of Zionism. What you will find in unraveling such derangement is that Islamophobia & anti-Semitism are the central ideological pillars of Assadism. With such a political vision, any ‘support’ for Palestinians is simply an expedience to attack Jews. When they oppose Zionism, it is not its rightwing character they oppose but that it provides an opportunity to vent their irrational hatred for Jews.