Amit Shah is grandstanding up a storm on Twitter celebrating the Citizenship Amendment Bill with thousands of nationalists cheering him on. India is a big place plus there are a lot of meatheads in the world. He reminds me of none so much as the orange meathead in the White House.

The US ‘Caesar Bill’ (named after the Syrian military photographer who documented the torture & murder of thousands of political prisoners in Assad’s gulag before defecting with 55,000 photos) is going to impose sanctions on Syria, Russia, & Iran for war crimes in Syria. We’d have to analyze the character of those sanctions to see if they’re anything like those imposed on Iraq which caused the deaths of 500,000 Iraqi children. Syria, Russia, Iran, & Hezbollah should be prosecuted for their war crimes & there are sanctions that might wisely be imposed. But there are questions: like why did it take the US eight years to take action? And most importantly, who will impose sanctions on the US for its war crimes against the Syrian people? We do not forget Raqqa.

An excellent article on Suu Kyi, the genocidaire who wears flowers in her hair, brazenly denying genocide charges & playing the Muslim terrorist card. The generals must think she has some charisma to pull this off–& a lot is at stake for them–better than some old codger lawyer attached to the military apparatus. 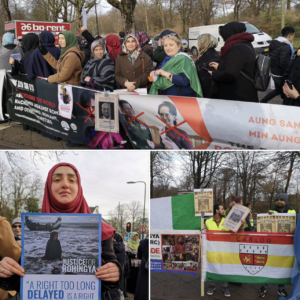 Protesters at the Hague for the Gambia case against Burma for the Rohingya genocide: Stephanie NiDiarmada who took these photos is at the Hague & reports that there is a sizable contingent of ASSK supporters protesting as well as Rohingya activists & their supporters. Correct me if I’m wrong, but doesn’t it seem that the majority out protesting against war, occupation, & genocide are Muslims?

On what next for Indians after the passage of the Citizenship Amendment Bill:

“Mainland Indian communist parties, leftist organisations of all shades and sizes, ambedkarite & bahujan groups and parties need to immediately call for a National bandh and strike and mass street protests against this Nazi attack on citizenship (not candle light or silent protests at null&void locations like jantar mantar and other such). Citizenship deprivation (NRC & CAB) is the biggest threat this country faces now, our entire future is at stake. Lakhs of people are going to be affected. We are looking at hell. We kept quiet when Kashmir was being conquered, over decades and since 5th August. But now it has concretely entered ‘our regions’. It is really the last opportunity, the last thread stopping us from slipping into absolute collective barbarism. Have we resigned to the fact that 20 years later we will pontificate this, regret this, and write books about camps and genocide, and individual heroism of saving a few lives of others. We have effectively abandoned our entire Muslim population to fight ALONE for their survival. This is shameful beyond words. It is the biggest failure.

Ps- I request all the young and old people from these groups/parties to pressurize their leadership to call for joint mass action. If not, then take action on your own.”

–Sumati Pk via Burhan Qureshi who commented “FFS, if not now then when?”

The local newspaper reported the death of the sixth child refugee held in a US concentration camp. He was a teenage boy who was sick several days, writhing on the floor in pain, ignored by the guards. They don’t know what he died from & are waiting for the coroner’s report. There is a concentration camp here for children but the young boy died in one just 45 minutes from here in Weslaco. My question is, why aren’t Trump & his entire administration, especially border patrol officials, prosecuted for these crimes against refugee rights & child welfare in violation of US law? Where is the immigration rights movement?

The Indian Parliament passed the Citizenship Amendment Bill (CAB) which excludes Muslims & is a giant step in the direction of making India a Hindutva fascist nation.

Khaled Mohammed remains quite sick. He is a well-known & extraordinary activist who campaigns for Palestinians & all the oppressed. We aren’t all rolling in dough & it is Christmas time but I hope many of you can find some extra bucks to help him out. I am a testimony to the kindness of others who so many times came to my rescue so I know what a powerful gesture it is to give to others in need. Please consider a donation. Even a small one goes a long way.

No one should get their hopes up that Gambia’s International Court of Justice (ICJ) Rohingya genocide case (on behalf of the 57-nation Organisation of Islamic Cooperation) will improve their conditions in the refugee camps, their rights to asylum elsewhere, or most importantly, their ability to move back home & live as free citizens of Burma. The track record of the ICJ isn’t that impressive.

This is only the fourth time since the ICJ tribunal was formed after WWII that a case has invoked the 1948 UN Genocide Convention. Two of the cases involved the Balkan wars in the 1990s. The ICJ rejected both the claim by Croatia filed in 1999 charging Serbia with genocide & the claim by Serbia filed in 2010 charging Croatia with the same. After 22 years of adjudication, the ICJ ruled that Serbia had violated international law by failing to prevent genocide but absolved it of direct responsibility. It found only one act of genocide during Bosnia’s 1992-1995 war: the massacre of 8,000 Bosnian Muslim men & boys by Bosnian Serb forces in the town of Srebrenica in 1995.

The third case invoking the Genocide Convention was brought by the Democratic Republic of Congo against Rwanda in 2002 regarding the 1994 Rwanda genocide when 800,000 ethnic Tutsi were massacred. By 2013, the tribunal had indicted a total of 96 individuals: 32 are currently serving prison time; 22 have completed their sentences, & seven died while in prison. It isn’t reported what happened to the other 35. The ruling by the ICJ in 2006 is almost incomprehensible not just because it is written in legalese but because it did nothing to clarify the political issues of the Rwanda genocide, or for that matter, the Bosnian genocide. That situation would prevail today in the Rohingya case were it not for social media where millions have been informed about the character & crimes of the Burmese government against the Rohingya.

This is not sour grapes about the ICJ. With social media, we can more closely monitor tribunal proceedings & use the testimonies to educate & promote solidarity with the Rohingya. In the end, it isn’t the ICJ that will bring justice for a crime so monstrous that there is no possible justice; it is the Rohingya themselves who will lead the struggle to return to Burma to live as free citizens & are using social media as part of that campaign–which may explain in part why Bangladesh snapped the internet in the refugee camps.

As a footnote, many of those political figures & propagandists who denied the genocide of Bosnian Muslims now support the Assad dictatorship, Putin’s military aggression, & deny the Uyghur & Rohingya genocides. Thus far they have in their majority remained silent on Kashmir. 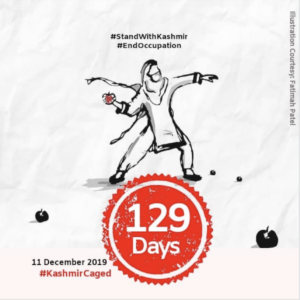 -Written by atherz on the 126th day of the Indian occupation of Kashmir.
Via @AziaKashmir