A friend traveling down from San Antonio stopped at a rest stop & saw a bleeding mother bird who had been run over with her baby sitting next to her. It’s illegal in Texas to rescue wild birds but my friend knew the baby would also be run over so she took it with her. As a notorious bird lady, she brought it over to me to care for. Many have brought orphaned birds to me & the prognosis is just not good. They grieve unbearably & believe me, it is painful to watch. One frantically tried to find his way out of my house over & over again but because he couldn’t fly, I knew feral cats would pounce on him within minutes. Once, in deference to the law, I returned a bird to where he’d fallen from his nest & crows had him within minutes. I am still distraught over that. What I’ve reconciled myself to is caring for them as long as possible knowing their grief at losing their mothers & their flock will very soon get the best of them. It’s a merciless world for wee creatures.

As reports of Border Patrol abuses & violence against children in the concentration camps dominate world media, we’re beginning to see reports of Border Patrol heroics in rescuing refugees from the Rio Grande River. Not to be the cynic–since it’s certain many Border Patrol agents have not become completely jaded–but it was reported a few years ago that the federal government spent more than $4 billion on public relations services just between 2007 & 2015. Nothing should salvage the image of immigration agents from that of the little boy with the poopy diaper & tin foil shoes. 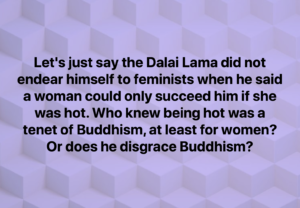 To date, prominent Assadists & their guppies publicly support the Chinese & Burmese regimes & deny the Rohingya & Uyghur genocides, support Duterte’s death squads against the urban poor & his war against Moro Muslims, denounce the Tiananmen Square massacre as nothing more than anti-capitalist propaganda, denounce the millions protesting in Hong Kong as anti-capitalists trying to shelter criminals from mainland China, deny poverty in Venezuela to support Maduro’s dictatorial regime. You’d think that would make some of those guppies question propagandist’s judgement about Syria. But in fact, they end up agreeing with all the other lies. When it comes to democracy & justice, whose side do you think they’re really on?

The majority of the so-called ‘left’ made itself irrelevant, if not completely criminal, by supporting the Assad dictatorship & justifying Syrian & Russian bombing of civilians to defend Assad’s right to self-determination. It was all over for them, no matter how well-versed they were in Marx & Engels quotes. But now they’re engaging in a gaseous dispute about Kautsky versus Lenin’s politics. Most of the leading figures in this dispute are people who haven’t gotten off their asses in decades to do something against injustice. So blither on boys since you’re living in an echo chamber.

If the Kautsky crowd want to join the Democratic Party (DP) & rally for Sanders & Warren, why stop them? Let them go & godspeed. This is still a free country. It’s their right to reproduce the mistakes & betrayals of the Communist Party who were among the most active members of the Democratic Party for decades. In my brief tenure attending DP meetings in the 1960s, the CP crowd voted at one meeting to oppose the Vietnam War & at the same meeting voted to endorse the 1968 presidential candidacy of Hubert Humphrey, an ardent supporter of the Vietnam War. Me, I’m a hard-ass & couldn’t live with that kind of contradiction so I quit & never looked back.

The point is not to engage in pissing contests exchanging quotes from Marx & Engels but to understand what they would say today about Syria, Afghanistan, Iraq, Yemen, Somalia, Libya, about Sudan, about sweatshops, about those US concentration camps for children, about refugee rights, about the Kashmiri, Palestinian, Uyghur, & Rohingya struggles. But about those issues, the so-called ‘left’ is either silent or on the wrong side. It really is all over for them. 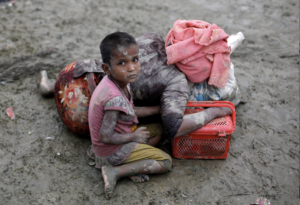 “Strengthening a unified human rights voice on the genocide of Rohingya is critical to educate the world about who we are, how we have been attacked, & the genocidal violence we have suffered. We do not have a country to advocate for us. And so, we need an alliance of survivors & allies.”

(Photo of Rohingya child with her mother collapsing after the flight to Bangladesh from September 2017. Photographer not identified)

A Canadian lobbying firm headed by a former Israeli intelligence operative has signed a US $6-million public relations deal with Sudanese general Mohamed Hamdan Dagalo to clean up his media image. General Dagalo heads the military dictatorship that millions of Sudanese are attempting to overthrow & is the commander of the Janjaweed paramilitary death squads which committed atrocities & massacres in Darfur.

What sayeth crocodile tears Justin Trudeau about this unspeakable deal? 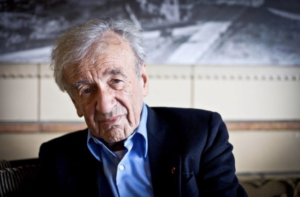 Reposting my anti-obituary for Elie Wiesel who died three years ago today at the age of 87. As one of the most feted Zionists & defenders of Israeli colonialism, he is renowned for his statement: “We must always take sides. Neutrality helps the oppressor, never the victim. Silence encourages the tormentor, never the tormented.” It’s unfortunate that he drew the wrong political conclusions from his own experience in the holocaust & used it instead to side with the oppressor & support the genocide of Palestinians.

There are so many ways to write the obituary of Elie Wiesel. We’re going to get a belly-full of the panegyric kind over the next few weeks. This isn’t that kind.

Being a Buchenwald survivor & losing close family members in the holocaust deeply affected Wiesel. But instead of putting his grief to good purpose by joining with others in the international struggle against racism & colonialism, he wedded himself to Zionism, the rightwing nationalism based on belief in Jewish supremacism.

Within a few years of his release, at the young age of 20, he began his descent into nationalist supremacism by translating articles for the Irgun, a criminal paramilitary death squad that helped create the state of Israel by the use of terrorism, including bombings & massacres of Palestinians. The Irgun eventually formed the basis of the Israeli army, still notorious for unspeakable brutality against Palestinians.

With growing prominence as a writer, he began to grasp the commercial value of milking the horrors of the holocaust for personal gain & to promote a Jewish-only state. He became a master at self-serving platitudes like in his 1986 Nobel Peace Prize acceptance speech when he famously said, “I swore never to be silent whenever & wherever human beings endure suffering & humiliation. We must take sides. Neutrality helps the oppressor, never the victim. Silence encourages the tormentor, never the tormented.”

Our man wasn’t silent. Nor certainly neutral. His bullhorn of choice was taking out full-page ads in international media to promote Jewish immigration to Israel, illegal Israeli settlements in the West Bank, & most despicably at the height of the 2014 bombing siege in Gaza, he justified that assault. While Israeli warplanes were bombing hospitals, schools, residences, refugee centers for seven weeks, this nationalist jackass took out an ad accusing Palestinians of using their children as human shields. That’s a hell of a condemnation that should be put on his tombstone.

For honing the art of propaganda in support of Jewish supremacism over Palestinians & to promote the state of Israel, our man has a pile of awards that go a mile high. He may be one of the most feted people in the world. That’s what you get for supporting colonialism & ethnic cleansing.

You’re supposed to find something good about a person when they die. There’s no reason to do that since the impending panegyrics will invent entire catalogs of virtues to attribute to him. If we must find some, let it be said he aged well & was a snappy dresser.

Let his epitaph reflect the life he led: he supported colonialism & the ethnic cleansing of Palestinians by carpet bombing that targeted children. He lived his own damnation. In his support of Israel, he knew no shame.

(Photo of Wiesel by Michael Fattal)

A report by Physicians for Human Rights on the widespread & systematic use of bodily mutilation by the Burmese military against Rohingya civilians, especially women. Now will UN human rights officials continue to whitewash Suu Kyi’s public role in this by making a distinction between the Burmese generals & the so-called civilian government led by Sui Kyi? 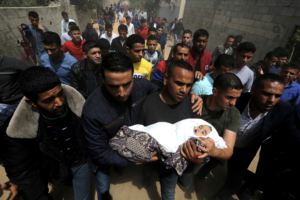 Over 300 academics associated with the US Holocaust Memorial Museum have written an open letter in the New York Review of Books protesting the museum’s rejection of the analogy between the Nazi holocaust & the US refugee concentration camps for children. This is actually an old issue with the museum going back to its foundations as a bastion of Zionism & support for Israel as a Jewish-only state. Elie Wiesel, who died three years ago today, was instrumental in setting up the museum to promote the idea that the Nazi holocaust of Jews was a unique atrocity for which there is no equivalent in human history. Not even the WWII atomic bombing of Hiroshima & Nagasaki nor the Atlantic slave trade where millions of Africans died.

In “The Holocaust Industry: Reflections on the Exploitation of Jewish Suffering.” Norman Finkelstein did a brilliant excoriation of how Zionists exploit the holocaust to advance support for Israel’s colonialism, apartheid, & genocide of Palestinians. Wiesel was so corrupted by Zionist supremacy that in 2014, while Israel was targeting children in its seven-week bombing assault on Gaza, he took out full-age ads in several major newspapers claiming Palestinians used their children as human shields.

Many of the academics who signed this open letter will remain committed Zionists. Many are undoubtedly sincere in their objections to the museum’s insular racism toward refugee children. But there are likely some who signed to counter the damage the museum is doing to Zionism with such boldfaced racism toward children. It isn’t cynical to question motives but an expression of hope that these professors & researchers will come to terms with the supremacy inherent to Zionism & to how the Nazi holocaust is taught & that in doing so they will make the analogy between the Nazi holocaust, the US concentration camps, & Israel’s colonial & genocidal policies which target Palestinian children.

US taxpayers paid $58 million this year to support the US Holocaust Memorial Museum. Speaking of holocausts, how much did the US Congress allocate to memorial museums educating about the extermination of Native Americans, the history of slavery & Black Lives Matter, or Israel’s ethnic cleansing of the indigenous people of Palestine? No one can object to educating about the Nazi holocaust of Jews. It’s imperative, but only as part of educating about the entire human history of colonialism, racism, white supremacy, genocide, war.

This photo is Palestinians in Gaza during funeral prayers for baby Saba Abu Arar who was killed along with her pregnant aunt Filastin Abu Shihma on May 5th, 2019.