At the UN Security Council, the US which has at least 60,000 refugee children in concentration camps, heatedly reamed China for its concentration camps for Uyghur Muslims. There’s no moral high ground here, only absolute corruption & barbarity.

The Dalai Lama did not apologize for his Islamophobic & racist comments about Muslim & African refugees but he did apologize for his comment that any female successor would have to be hot. He claimed it was a misunderstood joke which only compounds the insult. How many hundreds of times have women objected to misogynist insults only to be told they ‘couldn’t take a joke’? He should also understand that an insult to Muslims & Africans is taken as an insult to all of us. The criticism he is receiving is called pedagogy.

There’s a passionate intensity to the whole Brexit debate which I wish they would use to explain Fortress Europe & EU refugee policy which has caused the exclusions of refugees & the drowning of thousands in the Aegean & Mediterranean Seas.

Federal prosecutors will retry teacher & human rights activist Scott Warren for providing water, food, clean clothes & beds to two refugees crossing the border into Arizona. His first trial ended in a hung jury with four jurors finding him not guilty & four with their heads stuck up their butts ruling him guilty. He will be tried again in November & faces up to ten years in prison.

Most Assadists are Tulsi Gabbard supporters. Her grotesque Islamophobia, Zionism, anti-Semitism, Hindutva nationalism, & support for General Sisi don’t disturb her guppies at all since her social antipathies correspond with their own. Most socialist Assadists are Sanders or Warren supporters. Sander’s & Warren’s support for a Jewish-only state in Israel & US wars don’t disturb their supporters since when push comes to shove they are completely indifferent to the monumental struggles against war, occupation, genocide. Gabbard supporters outright support the oppressors & oppose popular resistance to them. Sanders & Warren supporters are simply indifferent which is a criminality of another sort, but still a criminality. 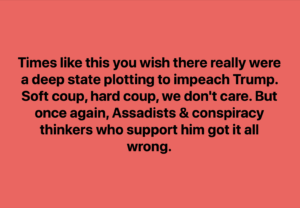 There’s no question that Ivanka Trump is as corrupt, amoral, & lying-assed as her father. She does after all, use sweatshop labor to make her clothing line & then has the temerity to argue against a minimum wage. But while she has no place in government, she isn’t as completely stupid as him & may be more intelligent than several past US presidents. It’s becoming a social media game to ridicule her for butting into discussions with political figures including a G20 discussion between Christine Lagarde, Theresa May, Justin Trudeau, & Emmanuel Macron where they rebuffed her. She’s as corrupt as the four of them & as vicious toward working people, but why is she more worthy of contempt than they are? Does anyone really think their discussions are on a higher level than that of Palestinian, Kashmiri, Rohingya freedom activists? It’s a misogynist thing to carry on about her. I would not defend that girl for all the stars in heaven but when you take her amorality on, it ought to be on terms of her corruption, not her gender. 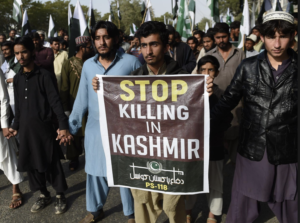 Forty-three civilians & 120 militants were killed in the first six months of 2019 in Kashmir, mostly in Indian army hunt to kill operations. Among the 43 civilians, nine of whom were children, 14 were killed by Indian occupying forces or police, 12 were killed by ‘unidentified gunmen’ who might have been undercover agents, 8 civilians died in reckless crossfire in the border areas with Pakistan, 5 were killed by ‘suspected militants’, & 3 died in explosions set off by unidentified agencies.

In addition to the large number of deaths, 95 Kashmiris were injured by pellet guns, mostly in their eyes, including three who died from their injuries. In these operations, civilian property continues to be vandalized & destroyed, including livestock.

The report issued by the Jammu and Kashmir Coalition of Civil Society (JKCCS) says 108 Indian army personnel were also killed, 80 of them in the 177 hunt to kill operations carried out this year by the occupying army. These deaths cannot be blamed on Kashmiri resistance but only on the Indian government for its violent occupation of over 700,000 troops.