Elliott Abrams–a rabid Zionist & Kissinger protégé who has a human rights crime rap sheet ten miles long (especially in drug trafficking to fund the Nicaraguan Contras, in Latin America, Central America, Palestine & the Middle East)–has been appointed the US official to deal with Venezuela. US international policy is not personal or personality-driven. We have no more to fear from Abrams than we do from any other flunkey diplomat overseeing US foreign policy. US policy is formulated on the needs of US capitalism which is in the vortex of a profound worldwide crisis.

What Abram’s appointment signals is increasing US military & human rights threats against the people of Venezuela. We should be alarmed about his appointment only because of those threats to Venezuelans. We should not panic about Abrams but must organize rallies around the world demanding “No US war against Venezuela!” 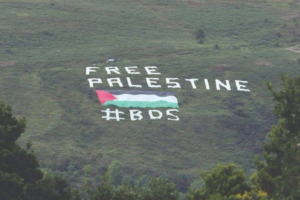 Senator Mitch McConnell scheduled another vote for this afternoon on an unconstitutional bill encouraging states to punish people for supporting the economic & cultural boycott of Israel for colonialism, apartheid, & genocide against the Palestinian people (BDS). This is not just a direct assault on Palestinian justice but on the US Bill of Rights. BDS is now directly linked to the entire Bill of Rights, the foundation of US democracy.

If we do not move into action with rallies, protests, forums, & coalitions to overturn these laws, we will soon be pledging allegiance to apartheid Israel, spending time in jail for posts like this, & fighting a rearguard battle for free speech & freedom of association. When we did not organize to protest violations of the Bill of Rights in the Black community, we set the stage for this eventuality. It is long-since time to organize.

Air traffic controllers at LaGuardia airport in NYC calling in sick & flight attendants threatening to strike is what forced Trump to end the government shutdown. There’s an ironic symmetry to that since the massive assaults on the already compromised US labor movement began in the 1980s when then president Reagan fired all the striking air traffic controllers. But more importantly, this labor action shows the power of labor to bring this rightward shift in US domestic politics (it has always been right-wing in international politics) to an end. 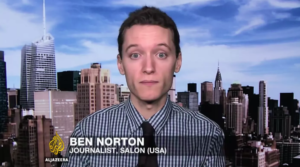 Assadist & Islamophobe Ben Norton (if you don’t believe me, listen to his podcast Moderate Rebels) has exposed hateful “comedian” Bill Maher’s war mongering over Venezuela. Real cutting edge politics to state the obvious! Now if we can just get our man Norton to stop denying the Chinese genocide against the Uyghur people & stop vilifying the Syrian Arab Spring uprising as “Wahhabi/Salafi jihadi terrorists”.

We scoffed when fascist Eva Bartlett said “I’ve been to Syria (embedded with the Syrian Army) & everything media tells you is a lie.” Now those who support US military intervention in Venezuela are using the same line. They claim, just as Assad propagandists Bartlett & Beeley did, that if we haven’t been to Venezuela or don’t know a Venezuelan that our opposition to US war is knee-jerk, unthinking ‘isolationism’. I’ve been an antiwar activist since 1966 & have studied every one of their damn countless wars but I haven’t been to a single one of those countries because my working class jobs did not make that possible. We don’t have to know the landscape of a country to understand US militarism or why the US is going to war against them. Or what are libraries for? In most of those wars, the antiwar movement has actively collaborated with activists within the country being bombed.

That the antiwar movement collapsed over Syria is not a surprise since the left went right over 40 years ago & no one has written a cogent analysis of that process & complex phenomenon. Ironically, it is Stalinism which thrives despite the collapse of the USSR. But that has everything to do with the convergence of Stalinism with fascism. They have finally found their natural habitat & hopefully their final resting place in hell.

No US war against Venezuela! It is up to Venezuelans to settle their score with Venezuelan capitalism led by Maduro. 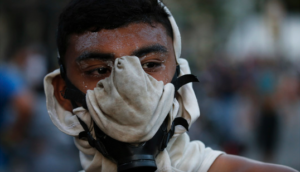 European countries have denounced the last Venezuelan elections as fraudulent. I’m sure they were. That’s for Venezuelans to straighten out with the Maduro government. I ran as an independent socialist candidate against Clinton & Trump but of course it’s impossible for most third-party candidates to get on the ballot in systematically rigged elections. In the 2016 rigged election, Clinton won. But the Electoral College of establishment flunkies handed it to Trump. So why didn’t those European countries go ballistic then? If they’re so concerned about democracy? In truth, the US ranks way up there among the most undemocratic electoral systems in the world.

(Photo of Venezuelan protester on January 23, 2019 by Fernando Llano/AP)