At the same time that China holds over one million Uyghur Muslims in concentration camps to force them to renounce Islam, it passed a law to “guide Islam to be compatible with socialism” & being Chinese. Will sane socialists ever be able to overcome the legacy of Stalinism & Maoism?

This is my post in response to FB prompting me to write a bio.

I was born during WWII & haven’t lived a day since when the US hasn’t been bombing another country.

In updating my blog from my Facebook posts, I noticed (again) that photos were deleted–this time of pellet gun victims, but previously also about Kashmir. In the future, I will copy the photos & acknowledge their source because I would like to keep an accounting of what is being censored & what removed by the original source. If any source objects to that method, please let me know & I will oblige your objections.

The extreme violence against those sustaining war, occupation, genocide is overwhelming to witness. It is our duty as human beings not to turn away because witnessing is as naught compared to enduring. Our commitment must be to build active solidarity to strengthen the political power of those on the front lines during these barbarous times. Nothing less than that is necessary to end the violence & create a humane world. Our deepest respect for Palestinians, Kashmiris, Rohingyas, Uyghurs, indigenous peoples, oppressed castes, & those enduring wars.

“It’s a shame that the Brazilian cavalry wasn’t as efficient as the Americans, who exterminated the Indians.”
–newly “elected” Brazilian president Jair Bolsonaro 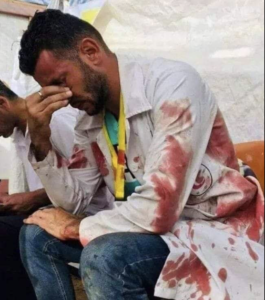 A paramedic working in Palestine. No other commentary necessary.

Since the US doesn’t allow beheading dissidents & bombing Yemen to stand in the way of its political relationship with Saudi Arabia, it certainly won’t allow the deportation of Rohingya refugees to alter a mutually beneficial relationship. 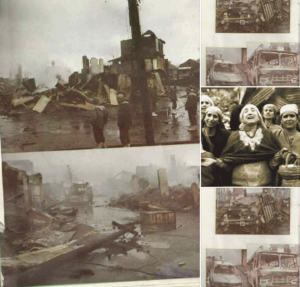 Today Kashmiris are commemorating the 26th anniversary of the Sopore massacre. Genocide has a long memory which cannot be laid to rest without justice. This post explains what happened in Sopore on January 6th, 1993.

SOPORE MASSACRE ANNIVERSARY AND THE JANUARY OF MASSACRES
January in Kashmir is also referred to as the month of massacres, for it has in the past witnessed some of the biggest and most brutal massacres carried out by the Indian occupation forces against the civilian populace of Occupied Jammu and Kashmir. As with all other human rights abuses and crimes against humanity, none of the perpetrators of the massacres in Kashmir has been brought to justice or held accountable.

Today is the 26th anniversary of one of the ‘January Massacres’ which was carried out against the unarmed civilian population of Kashmir.

Attached below are pictures from the archives, depicting a small portion of the aftermath.

This is an additional article about the massacre by Faizan Bashir: https://m.kashmirobserver.net/2019/opinion/6-january-1993-remembering-smouldering-sopore-39249?

Honored to be published in a Kashmiri journal.

Indian military officials have announced the use of “non-lethal” plastic bullets as a substitute for pellet guns in Kashmir. Plastic & rubber bullets are called Kinetic Impact Projectiles (KIPs) because they are ostensibly used to injure, not kill. We can dispense with any notion that the Indian army will actually discontinue pellet guns since they’ve proven so effective against unarmed protesters in terms of injuries, disabilities, disfigurement, & deaths. This so-called substitution is a cynical maneuver, almost certainly a response to quell international criticism by media & human rights groups over the use of pellet guns, which are also called non-lethal.

What makes this ‘substitution’ so cynical & contemptible is that there is a very public record going back decades of morbidity & mortality rates from the use of plastic & rubber bullets. British occupation forces first introduced their use into Northern Ireland in 1973. There has been extensive litigation against the British Ministry of Defence for attempting to conceal the dangers of plastic bullets from Irish victims seeking compensation. They were used in the 1980s against anti-apartheid protesters in South Africa, as recently as 2014 by Spanish police against Catalan protesters, & since 1988 by Israeli occupying forces against Palestinians. Israeli Defense Minister Yitzhak Rabin introduced them against the First Intifada which had begun several months earlier in 1987. When a UN official pointed out the high number of Palestinian children injured by plastic & rubber bullets, Rabin responded, “Our purpose is to increase the number {of wounded} among those who take part in violent activities but not to kill them.” Despite his genocidal disregard for the lives of Palestinian children, Rabin went on to win the 1994 Nobel Peace Prize.

Last year, the journal BMJ Open published a study by a team of scientists & medical researchers who reviewed 26 worldwide studies conducted on the use of plastic & rubber bullets from January 1990 through June 2017. That study was reported widely, including in Israeli media. The study encompassed 1,984 people who had been injured (the majority classified as severe) & 51 people killed by KIPs. They found that 300 (15%) of those injured were permanently disabled, most commonly through loss of vision. “Blindness, & removal of the spleen, or a section of the bowel as a result of abdominal injuries, accounted for most of this disability.” The researchers pointed out that statistics are probably incomplete & conservative because of tendentious or under-reporting by police, military, & manufacturers.

India actually introduced the use of plastic bullets in Kashmir early last year. It was reported as early as April 2017. Like Yitzhak Rabin, an Indian army official claimed that plastic bullets do not pierce the body & at most cause minor abrasions & contusions. That’s called lying through your teeth. The Indian army knows very well the kind of damage caused by KIPs but are as indifferent about that as they are toward the disability, disfigurement, & deaths caused by pellet guns. Although they kill, the purpose of KIPs is to permanently disable activists & demoralize resistance to occupation.

Stop the use of pellet guns & plastic bullets. End the occupation. Self-determination for Kashmir.