The White Helmets: “Our work is guided by the Quran: “To save one life is to save all of humanity”

And the best sarcasm goes to: “These Oscars were a Zionist-Wahabbi conspiracy to enact regime change in Syria. I condemn every minute of it.”

“The White Helmets” won an Oscar tonight for Best Documentary (Short Subject). Two of the rescue workers, leader Raed Saleh & cinematographer Khaled Khatib, were scheduled to attend the awards but Saleh was unable to leave because of the extreme intensity of airstrikes in Syria & Khatib could not because the Syrian government cancelled his passport.

Saleh said the film is a “platform for the voices of Syrian children & women trapped under the rubble as a result of the airstrikes & artillery shelling, & for the voices of thousands of displaced Syrians who have been forced from their homes.” It is also a tribute to those who risk their own lives to rescue them from that rubble.

(PS: To those Assadists who campaigned so feverishly & prayed so ardently to their gods for the film to lose, may we say, “Eat it.”)

So why are all the Assadists experts on Islam? They throw around Wahhabism, Salafism, Sunni, & Shia like epithets when they don’t know their way around their own catechism. In colloquial language, it’s called blowing smoke.

It is important to understand the dialectics of theology & politics in Syria & the rest of the Middle East. Not as a way to impugn Islam as a religion fostering terrorism–any more than Catholic theology fostered inquisitions & colonialism–but to understand the complex interaction of ideology & autocracy, whether feudalism or capitalism.

In “Burning Country: Syrians in Revolution & War” by Robin Yassin-Kassab & Leila Al-Shami, there is a valuable discussion of the rise of Islamism in Syria & a bibliography to broaden ones study. Once you get a handle on this issue one is less inclined to engage in pissing contests with Assadists who employ epithets to mask ignorance & Islamophobia.

Mohammed Imran, a Rohingya refugee & refugee advocate, is the author of this letter to the Bangladesh Prime Minister about the government’s deranged proposal to move thousands of Rohingya to the uninhabitable island of Thengar Char before deportation back to Myanmar from where they fled from genocide.

The work of the women & men of Kunan Poshpora collaborating with Kashmiri feminist & human rights activists is very different than the victimology of other agencies. They are changing the political approach to crimes against women & children (as well as men subjected to sexual torture). What they have to say is an invaluable education about exposing, educating, & campaigning against sexual violence under military occupation & in war.

Wande Magazine (https://www.facebook.com/wandemagazine/) editor Irfan Mehraj here interviews Ifrah Butt, one of the co-authors of the book Do You Remember Kunan Poshpora, 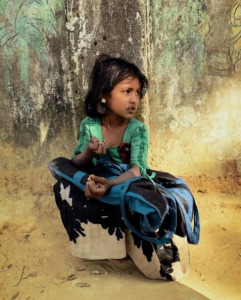 The international exposure of genocide against Rohingya Muslims in Myanmar presents a problem for multinationals investing in the country as part of its neoliberal economic program. Billions of dollars are at stake for the ruling elite & military & for the corporations. It isn’t that any of the parties involved are squeamish about genocide but that political pressure & opposition from Rohingya & human rights campaigners make their investments unstable.

Without making any outright accusations, but hoping the drift of this post is not too subtle, it is of considerable interest that David Scott Mathieson, a senior researcher on Myanmar for Human Rights Watch (HRW) from 2006 to December 2016, now calls himself an “independent analyst” based in Yangon.

He was directly involved when HRW released satellite imagery in October showing evidence the military was torching Rohingya villages. Going back in his tenure at HRW, he has issued many dispatches calling on the government under the military junta & then under Aung San Suu Kyi to be accountable for human rights crimes against Rohingya.

Just a few weeks after becoming “independent,” on January 16, 2017 he published an article in the NY Times titled “The Lady & the Rohingya,” which is an embarrassing apologetic for Suu Kyi, elaborating all the reasons why she cannot be judged too harshly for collusion with the military in a genocidal campaign of unspeakable criminality.

In the political style of the day, he brought up the issue of fake news to counter those who disagree with his accommodations to the Suu Kyi regime. That political trick is wearing thin, whether it’s used by Assad propagandists, Trump & Bannon, or Mathieson. You have to cogently rebut what people say, not just dismiss it all as lies. If you cannot answer with credible arguments & evidence, then you have to expect interrogation about your political loyalties.

Mathieson showed his hand when he said “Crude misinformation is disseminated at a prodigious rate by members of the Rohingya diaspora outside Myanmar, especially via the widely discredited websites Rohingya Blogger & Rohingya Vision.” Widely discredited, my foot! Those are two of the best blogs, both written by Rohingya activists which just as often repost useful articles from mainstream media sources. They are of the highest political quality & if they’re “widely discredited,” it is only in the new circles Mathieson is probably now hanging with as an “independent” analyst. Independent analyst, my ass! 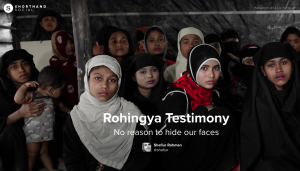 Mayan & Kashmiri women & human rights activists are forging a new political approach to addressing military sexual violence, taking it out of the realm of victimology & rejecting any notion that shame adheres to the victims any more than being disappeared or executed or tortured in other ways.

Now Rohingya women, subjected to the same horrors by the Myanmar military, take their place with Mayan & Kashmiri activists in exposing & denouncing the crimes committed against them. This documentary was just released today: “Rohingya Testimony: No reason to hide our faces.”

Rohingya Testimony: No need to hide our faces (video): https://www.youtube.com/watch?v=BmyJ6wQKEr0&feature=youtu.be

None of my dogs get the concept of dancing except the three-legged Chihuahua. It may not be appropriate to dance to protest music but he really grooves on MC Kash. I try to render his moves dignity & not laugh but I think in the end he’s just groveling for love.