This is a video of the Syrian uprising against Assad’s dictatorship in Aleppo in 2012. It’s the revolution Assad & his coterie of propagandists claim is fake news & never happened. There were protests like this across Syria, as those who followed & supported the Arab Spring remember well.

As part of commemorating Kashmiri Women’s Resistance Day, these articles about the mass rape & torture perpetrated by Indian occupying soldiers at Kunan Poshpora are valuable for understanding a monstrous crime still demanding justice:

Hopefully that Milos Yiannopoulos creep hath been “hoist with his own petar.” Or as the French would more aptly phrase it, with his own péter.

Social transformation requires respect for others, not smart-alecks who hate. 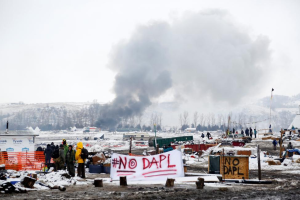 The DAPL protest camp in North Dakota, where thousands have stood with the Standing Rock Sioux for six months, was dismantled & set afire by protesters yesterday as part of a leaving ceremony. They had been given an eviction notice by the Army Corp of Engineers to comply with Trump’s executive order since the camp was on federal lands.

The protesters would have been raided & assaulted, not for the first time, so the anticipated spring flooding is the more likely reason they pulled up stakes & razed the camp.

Trump can issue executive orders till the cows come home. That does not preempt national sovereignty for the Standing Rock tribe & by no means ends opposition & protests against DAPL. North Dakota is only the beginning of the pipeline project. It has 1,200 miles more to go across North Dakota, South Dakota, Iowa, ending at a terminal in Illinois to be processed for distribution.

The movement to stop DAPL has just begun. There will be some scuffles. There will be some setbacks. The government will maneuver & try to outsmart the movement & when that doesn’t work will use excessive force because billions are invested in this project. Tough noogies. Indian tribes, farmers, residents of those states, environmentalists, should have been consulted beforehand so the resounding opposition could have saved investors all their money & time.

(Photo of DAPL camp being dismantled yesterday by Terray Sylvester/Reuters)

The Kashmiri Women’s Resistance Day public event in Srinagar was denied a permit as part of India’s denial of justice for the victims of mass rape & torture in Kunan Poshpora. A Twitter campaign was held in solidarity. The Indian authorities cannot silence the demand for justice which is now international.

Today is Kashmiri Women’s Resistance Day to highlight how military occupation affects the lives of women & the role they play in resistance. It is also to commemorate the mass rape & torture at Kuman Poshpora in 1991 which is still denied legal justice.

This is a marvelous article by activist Essar Batool, a co-author of “Do you remember Kunan Poshpora?” & one of the petitioners to the court to reopen the Kunan Poshpora case against the Indian military: https://www.awid.org/news-and-ana…/womens-resistance-kashmir

It’s true that if Trump gets dumped he’ll be replaced by Pence who is just a less vulgar version of Australopithecine fascist. But the fact that he’s higher on the evolutionary scale–at least a step or two after the split from the chimpanzees–does make the next four years less like a descent into hell.

This is so much fun. The wild & crazy Norwegians. 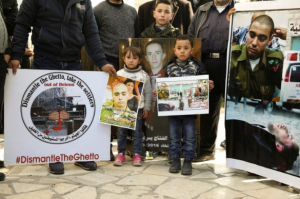 Palestinian kids protesting the 18-month sentence for the Israeli soldier who extrajudicially executed 21-year-old Abd Elfatah Ashareef on March 2016. This impunity is a contrast to the sentence a Palestinian boy can get for throwing a stone–up to 20 years in military prison.

Palestinian Ahmad Manasra was convicted last November of two counts of attempted murder & sentenced to 12 years in prison for a stabbing attempt on two Israelis when he was 13. Young Ahmad had not actually stabbed anyone. The young boy with him who did was shot dead on the spot.

Israeli Meir Ettinger, designated a terrorist by Israeli police officials, was arrested in 2015 for leading others in a firebomb attack on the home of a Palestinian family in the West Bank. An 18-month-old boy, his mother & father died in the fire. A surviving 4-year-old boy was burned over 60 percent of his body, is still undergoing medical treatment, & has been orphaned.

Ettinger was not charged with a crime & was released after ten months with a curfew, a ban from entering the West Bank or East Jerusalem for one year, & barred from contacting his terrorist cohorts for six months. The equivalent of the naughty finger for murdering Palestinians sleeping in their beds & causing lifelong physical & psychological suffering to a child.

Such is the “justice” of military occupation & colonialism. Use your indignation to build BDS: support the cultural boycott & the economic boycott of Israel. Buy nothing with barcode beginning 729.

Requiems abound for Vitaly Churkin, the former child star who became a Russian diplomat in the USSR era & was savvy enough to move seamlessly from Brezhnev to Gorbachev to Yeltsin to Putin–all of whom had that certain je ne sais quoi that makes a thug.

His final days were as permanent Russian ambassador to the UN where he defended Russian carpet bombing of Syrian civilians & ran interference for Assad’s use of barrel bombs & chemical weapons. He claimed the evidence for the use of chemical weapons might have been falsified by terrorists.

He reportedly had a gift with language which he certainly would have needed to cover all the criminal territory he did in the past 43 years. He should of stuck with movies.