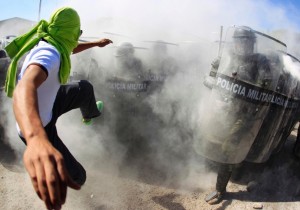 The defiance of protesters against superior armed force not only evokes immense respect but also an understanding of the depth & power of their fury. This activist in Guerrero, Mexico is kicking the shields of military police as protesters tried to enter an army base near the town of Iguala. Such defiance is remarkable against an army that has killed over 70,000 people & disappeared thousands just in the past decade. The Mexican government admits to 8,000 disappeared & blames it on criminal gangs; human rights groups estimate the disappeared at 30,000–& we don’t know if that includes undocumented immigrants from Central America. We now know the distinction between the Mexican regime & criminal gangs has become irrelevant since last September local officials handed over 43 student teachers to a criminal gang to murder & incinerate–like they were garbage.

In Chilpancingo, the capital of Guerrero, teachers broke into several public buildings including the ministry of education. They evacuated staff & painted the number 43 on the walls. They broke into the national election commission & said they would not allow scheduled elections to be held on June 7th. They moved on to the State Congress & Government Palace facilities, broke windows, & painted 43 on the vehicles in the parking lot. Those who consider this lawless should keep in mind they have been stonewalled nearly four months by the Mexican government in answering questions about the crime, taking responsibility, & finding the remains of the 43 students.

There must be a considerable amount of fear among teachers & activists that such a large group can be picked off so easily & disappeared with no accountability. It sends chills just thinking about it. The only way to oppose such horrors is the kind of mobilization & fearlessness they are showing now. We need to find ways to build active solidarity with the political movement in Mexico especially in the US since the US bankrolls a good share of the operation.

Our fullest respect & solidarity with the activists of Guerrero. Give ’em a good kick for us! 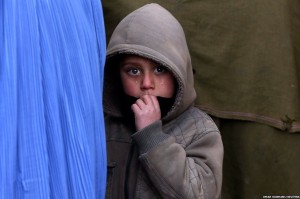 Caricature this. Emancipation US-style: this little guy is lined up with his mother at a refugee camp in Kabul, Afghanistan to receive food from the World Food Program (WFP), a UN agency. Studies done by the World Bank & WFP show that nearly one-third of the 31 million Afghanis are “food-insecure.” In normal language that means they don’t have enough food to eat. A staggering 60% to 85% of children suffer chronic malnutrition. One study parsed things even finer & said about five million more people are “borderline food-insecure.” You have to admire the bureaucratic mind that can make a distinction between starving & borderline starving. How do you measure that? Does a spud a day tip the balance?

Afghanistan has an agricultural economy. It grows potatoes, wheat, cereals, several fruits & nuts, & of course, poppies for the opium market. But much of this is for export & all is governed by the market economy. The food prices are reportedly sky high & if you don’t have money, you don’t eat. That makes sense under capitalism.

The WFP is the very soul of diplomacy in explaining why so many Afghanis are starving. They talk about uncontrolled grazing, illegal logging, drought, environmental degradation. They say “insurgent activity & military operations have affected food security in some regions.” Maybe they could spell it out & admit that farmland for food staples is more profitably used for poppies & that war & drone bombing have proven incompatible with farming.

In 2009, WFP announced it would provide food for 8 million people. Two years later, it announced it would cut food aid to over 3 million Afghanis because of a shortage of money from donor nations. Just like in Haiti & Gaza, regimes pledge donations they never deliver. WFP said then it needed at least $220 million more to continue at previous levels.

It should be said that a country that occupies another, destroys its agriculture, creates millions of homeless & refugees, & makes life a living hell for millions has a hell of a lot of nerve treating humanitarian aid like noblesse oblige.