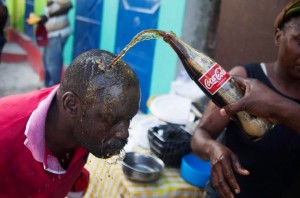 We stand in solidarity with you as the political & social forces that will bring change by challenging neoliberalism, the barbaric phase of capitalism. 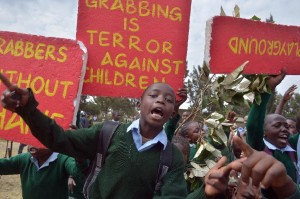 For the past several months, there have been protests in Kenya against the austerities imposed on higher education–with riot cops chasing protesters into classrooms with tear gas canisters. This is the first time 8-year-olds are reported as entering the fray. There is probably no more promising development in Africa against the depredations of neoliberal plunder & IMF-World Bank austerity programs.

To whichever Hollywood celebrity is covering Kenya for the US State Department, we say “Eat that, buster!” 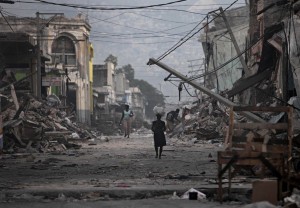 In January 2012, on the 2nd anniversary of the Haitian earthquake, Oxfam issued a report saying reconstruction was moving ahead “at a snail’s pace,” that 500,000 Haitians were still homeless, most didn’t have running water, a toilet, or access to a doctor in a cholera epidemic caused by UN troops–but there was progress because half of all earthquake rubble had been removed. Unicef issued a similar report about the evidence of “meaningful & positive change.”

This photo is Port-au-Prince taken nine days ago. There are still 400,000 homeless living in tent camps without water or toilets, & it’s reported that 91 out of 250 cholera treatment centers have been closed. The Martelly regime, associated closely with the Obama regime, is now forcibly evicting people from the tent camps to live on the streets so land developers can take over. This might be the time for Oxfam & Unicef to make a further accounting–since we don’t expect any accounting from the US & other international donors.

Most of the billions of pledged international aid was never delivered. USAID is hardly a model of transparency but what they did report is that nearly 90% of aid delivered to Haiti was to US companies & NGOs for “agriculture, infrastructure & other projects.” Projects like the $300 million sweatshop complex set up by the Clintons, the power plant that dispossessed hundreds of Haitian farmers, & the airport so Haiti can develop its tourist industry. But no homes or toilets or clinics.

US companies actually set up a lobbying group called the Council of International Development Companies (CIDC) so they have a voice in the US Congress to drown out the voices of the Haitian people. But there have been many protests in Haiti which UN troops & Haitian riot cops have fired on. So much for that UN peacekeeping crap! The UN refuses responsibility for the cholera epidemic & doesn’t even have the elementary decency to maintain clinics for those afflicted.This is what you call plunder & colonialism & it would be good if the hundreds of NGOs operating in Haiti would speak out about this. Or is the aid they receive from USAID nothing more than hush money?

Our fullest solidarity with the people of Haiti. It’s long-since time we get off the schtick & make it an active solidarity.