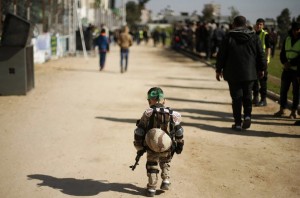 This little Palestinian boy in full military regalia is going to the graduation ceremony of 17,000 youth trained at the Vanguards of Liberation military camp in Gaza run by the Al-Qassam Brigade. At the week-long camp, young people aged 15 to 21 are trained in the use of weapons, martial arts, & self-defense.

Media has shown several photos of small children attired like this, likely with the intention to portray Palestinians as warlike & belligerent. To do that they have to tap into massive cognitive dissonance because the sale of war toys & video games based on exterminating the enemy is a multi-billion dollar industry in the US alone. Since the US has troops stationed in several countries, it’s imperative to inculcate children with the spirit of aggression & war. That’s not what’s happening in Gaza where the entire population is fighting for their lives against Israeli ethnic cleansing.

Moralists & pacifists can tsk-tsk this till the cows come home but children were directly targeted by Israeli bombers & Palestinians have a right–for heaven’s sake, they have a duty–to teach their children to defend themselves.

No child should ever be raised with the specter of carpet bombing for purposes of ethnic cleansing. According to many reports, most children in Gaza suffer extreme psychological distress from the bombing which lasted over 50 days (& which still continues in sporadic drone sorties over Gaza). Part of the healing involves giving children a sense of empowerment through self-defense. Certainly in part, that’s a false sense against Israeli bombing. But what is essential is teaching children the spirit of Intifada, to rise again against colonialism, apartheid, & ethnic cleansing.

The greatest defense the children have is the international solidarity movement. This is a time to build that movement through teach-ins, forums, other educational events, & rallies which explain the justice of the Palestinian cause & evangelize for the economic & cultural boycott (BDS) of Israel. 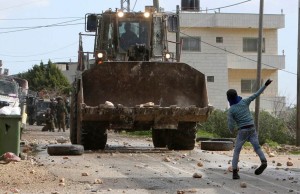 This iconic image of a Palestinian boy against Israeli tanks & bulldozers is now common but it remains a symbol of unarmed resistance to colonial occupation. This boy is throwing stones (now punishable with 20 years in jail under a new Israeli law) at an army bulldozer during the weekly protests against the Zionist settlement of Qadomem near the Palestinian village of Kofr Qadom in the West Bank (on Jan 30th).

Qadomem was settled by the Gush Emunim settlement movement, who combined right-wing Zionism with religious fundamentalism based on the teachings of the appropriately named Rabbi Abraham Kook & his even nuttier son Rabbi Tzvi Kook. They claim a Biblical deed to Palestinian land on the belief that God gave it to the Jewish people & they are fulfilling a biblical prophecy by taking it back. To say Gush Emunim is not as rabid as the Jewish Defense League of Rabbi Meir Kahane is hardly high praise.

Under international law, all Zionist settlements in the West Bank are illegal. This may be what spawned the hare-brained scheme of Move-On, the Democratic Party group, to call for UN troops to Palestine. International law has not deterred the European Union (EU) from doing business with the illegal settlements. The EU not only opposes the economic boycott of Israel & products from the West Bank settlements but remains Israel’s largest trading partner. The EU imports an estimated US $300 million from illegal Israeli settlements, which is 15 times the amount of imports from Palestinians. In terms of which side the EU is on politically, commerce speaks louder than law.

Israel makes a distinction between legal settlements authorized by the Israeli government (like Qadomem) & illegal outposts (which are expansions) built after 1991. This distinction in Israeli law is flouted in actual practice by Zionist settlers aided & abetted by Israeli soldiers. If the Israeli government takes any steps to dismantle one of these outposts or new construction in the West Bank, the settlers use a tactic called the “price tag policy” which exacts revenge not on the Israeli army but on local Palestinians, including vandalism of Palestinian property, physical attacks on Palestinians, burning of mosques & fields, uprooting of olive trees, damaging & defacing property.

Gush Emunim no longer exists as an organization but the Qadomem settlement is still run by religious & political zealots with ties to the most right-wing political forces in Israel. Qadomem boasts of its education system; it also has a construction company that boasts of it’s achievements in building outposts, homes, community & industrial buildings, shopping centers, synagogues, roads, walls–all on Palestinian lands.

The fearless spirit of this Palestinian kid standing up with rocks against Israeli bulldozers is the spirit of intifada & resistance to ethnic cleansing. Honoring the boycott of Israeli products (barcode beginning 729) is a way to support Palestinians in their struggle.