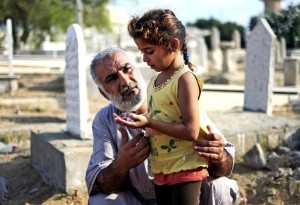 The media caption tells us this small girl at a cemetery in Gaza City is being guided in prayer by a relative at the grave of their loved one. We aren’t told who they’re grieving. His child & her parent? We don’t need the caption to explain his love & concern for the child which is written all over his face.

And yet Zionist war propaganda denies Palestinians their humanity. When Israel & media claim Palestinians hide Hamas rocket launchers where their children play, they indict all Gazans not just as terrorists, but as deranged & bereft of even the most primary human emotions like love for one’s children. Does it strike anyone that such a mentality allowed colonizers to wrench children & family apart to compel slavery & forced labor or to justify unspeakable crimes against colonized people? How can Israel sink that low?

When Zionism at its inception threw in its fortunes with colonialism & racism rather than join the historic world movement against them, the die was cast. Zionism has no where to go & it’s leading a nation bred on social hatred into a death trap. Those Israelis who stand today with Gaza despite government persecution & right-wing goon squads, those Israeli soldiers refusing to serve genocide in Gaza, those African refugees fighting deportation & incarceration in Israel, & Palestinian intifada activists in Gaza & the West Bank are the only hope of political transformation. Zionism has to go.

Zionism has to go because it is a misanthropic, elitist ideology based on social hatred & rapprochement with colonialism. Lies & racism are its stock-in-trade. Like in the German legend, Zionists made a Mephistophelean bargain & Palestinians are paying the ransom due.

Support justice by continuing to demand “Stop the massacre in Gaza,” boycott all Israeli goods (barcode beginning 729), & support the cultural boycott of Israel.