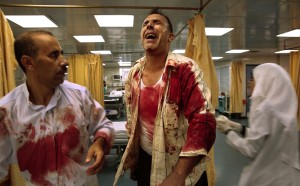 It seems such an invasion of privacy to intrude on this man’s grief at losing a son from an Israeli rocket in Gaza City. He just carried another son for emergency care from the same rocket strike. There are hundreds of photos of Palestinians sobbing at the gruesome deaths of their beloved children. Well of course. That should go without saying. And still the rancid media pours out claims Palestinians use their children as human shields, that Hamas places rocket launchers near children. That’s how Israel explains why they bombed the school refugee center & the playground & the hospital children’s ward & why they systematically target children in this genocidal rampage. And the media, representing the economic & political institutions with a stake in Israeli dominance, repeat this stinking mendacity as the gospel truth.

Let’s be frank: this isn’t something that should have to be rebutted. There’s a level of racism involved here that is not just colonial & contemptible but the ideological avatar of that era when European colonizers considered colonized peoples animal life & not human. Only racist Zionism could make such odious imputations against the Palestinian people when the entire body of photograpahic documentation exposes Israeli ethnic cleansing, not Palestinian cultural barbarism.

We are so sorry to intrude on this man’s grief. May his son RIP & may his injured son heal from the physical & psychic harm.