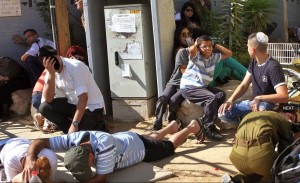 We would never stoop to ridiculing actual suffering by Israelis due to the murderous acts of their government in Gaza–even if they’re so misguided & racist to support that genocide. But media has been unable to produce photographic documentation of any anguish in Israel, try though they have.

When propaganda grasps at straws it can become indistinguishable from burlesque. This photo would be a case in point. It’s captioned: “Israelis take cover during a rocket attack by Palestinian militants from the Gaza Strip during the funeral of Israeli Cpl. Meidan Maymon Biton, 20, at the cemetery in the southern Israeli city of Netivot. Meidan was killed the previous day when a mortar shell fired from the Gaza Strip hit the Eshkol regional council, which flanks Gaza’s southern border with Israel.” We’re sorry for the death of young Biton. May he RIP.

But take a look at this tableau vivant & ask yourself: Why is the guy hiding from a rocket behind his yamulka? Why is the kid covering his ears & laughing as that lethal rocket heads his way? Why is the kid in the chair so nonchalant as he’s about to meet his maker? Are we supposed to believe a young soldier got hit with a mortar shell sitting at a city council meeting rather than serving duty in Gaza? What about a photo of the council building to prove we’re not being run around the block by hasbara?

Oh the tangled web we weave when we try to pawn off farce as funereal.