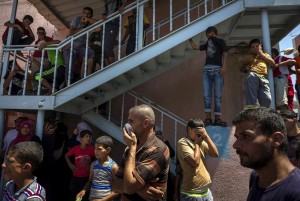 It has to be said bluntly, without hedging, that Zionism has a deeply psychotic tendency–not something peripheral to Zionism but part of it’s very nature. This murderous assault on Gaza shows hasbara falling apart at the seams, unable to render a coherent explanation of why they are bombing children & refugee centers. But worse, it exposes Zionist ideology as cultural dry rot debasing & corrupting the very soul of its adherents.

We see it not only in people like Netan-psycho-yahu, Regev, Dermer, & other Israeli leaders but in Israelis who sit in lawn chairs & cheer on ethnic cleansing; in the claim that Palestinians use their children as human shields; in the IDF soldier who boasted on Instagram of killing thirteen Palestinian children like he was shooting squirrels; in the roving goon squads in Israel going after peace protesters & Palestinians. We see it in media like The Jerusalem Post or the Washington Post, urging the complete destruction of Gaza, or The Times of Israel, explaining why genocide is appropriate for Gaza. Such hatred sucks the breath right out of you. Such hatred is the dry rot of Zionism heralding it’s demise.

Hasbara can’t explain the hundreds of photos of Palestinian children mangled, dismembered, laden with shrapnel, traumatized that have circulated hundreds of thousands of times on Twitter & social media. That’s when they bring out their most troubled, conscienceless apologists like Phillippe Assouline, a UCLA doctoral student who bills himself a lawyer, free lance journalist, & peace activist. (And I’m a monkey’s uncle.) ASSouline has been writing hasbara for a while now, including for The Times of Israel, a right-wing tabloid that tries to make up in sensationalism & venom what it lacks in journalism. In his insipid style (his hatred doesn’t compensate for lack of talent), he opposes BDS, defended the November 2012 Israeli bombing siege of Gaza, & now this stage of Operation Ethnic Cleansing, which is looking more & more like the “final solution.” But genocide of Palestinians does not make our man squeamish one iota.

ASSouline’s a smarmy fellow; bold-faced lying is his stock in trade & there is no indignity in that realm he won’t stoop to. In an August 1st article in The World Post entitled, “Pornography of Pain: Why the Heartbreaking Images Out of Gaza Are Hurting the Palestinians,” he swears he’s seen Hamas launch rockets from their schools & homes & use children as human shields. (And I’ve seen images of the Virgin Mary in a grapefruit tree out back.) So hasbara has tasked him with explaining all those mutilated children & we should not doubt for a moment, remunerate him handsomely for services rendered.

Well listen to our man speak about those photos of children–the same photos that most human beings in the world view aghast in horror: “Preying on human emotions as a proxy for journalism, even where sprinkled with facts, may be good for ratings–like fear and sex–but it has turned too much of the coverage out of Gaza into little more than snuff with a halo.” Don’t miss the image he creates of deceased & beloved Palestinian children: “snuff with a halo.” That’s his version of Netan-psycho’s “telegenically dead” Palestinian children. Take a moment to catch your breath. He goes on to say “This macabre sensationalism also distorts our perception.” Oh that it does all right! It strips that Exodus narrative right down to it’s bony ass to expose hate & racism as all that’s left to justify a Jewish-only state.

Hasbara might want to take ASSouline out of service. To equate the gruesome deaths of children with sexual snuff films is something only a pervert & a Zionist could conjure. This photo is Palestinians outside a hospital in Khan Younis, a center of much Israeli bombing, holding their noses against the smell of death as bodies recovered from cement rubble are delivered to the morgue. Sergey Ponomarev, the freelance photojournalist covering Gaza for the NY Times said: “That’s the way this city lives now–one funeral to another, hiding from bombs & collecting the dead.”

All out in solidarity with Gaza! Long live intifada! Take it international by rallying & boycotting all Israeli products (barcodes beginning 729 & 500).