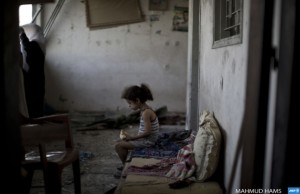 War propaganda to justify ethnic cleansing becomes more irrational with every day. The media caption to this photo said “A fresh wave of violence killed dozens in Gaza.” “A fresh wave of violence” from whom? Killer bees? Those evil fairies again? Or Israeli bombs, mortars, flechette shells, DIME shrapnel? We’re told the UN & US proposed ceasefire “collapsed.” How does a ceasefire collapse? When Israel ignores it (again) & starts bombing market places & refugee centers? An Israeli soldier was killed trying to take out small Palestinian children & this was denounced furiously by Israel & the US as kidnapped by Hamas. Odd that, since the US has never raised a peep of objection when Israel tosses hundreds of Palestinian kids into its gulag & terrorizes, tortures, & threatens them. But “kidnapped” in a war; isn’t that what they call a POW when Hamas isn’t involved?

This despondent looking little Palestinian girl is trying to eat something sitting in the rubble of her home destroyed by Israeli bombs yesterday. The trauma of small children must be unbearable to endure & wrenching for parents to witness because there are no reassurances they all won’t die in the next airstrike. World media will simply report–with a treachery & psychosis pro forma in journalistic coverage of Gaza–that hundreds of Palestinians died when they parked their kids in front of Hamas rocket launchers or at the entrance to those imaginary tunnels–& Israel, regretting the carnage, had to bomb them into smithereens..

The international solidarity movement that refuses to accept racist propaganda to support ethnic cleansing has an immense mission: to continue mobilizing, speaking out, educating, explaining until we’re blue in the face because Palestinians under siege cannot. We have a commitment to justice & cannot give an inch to despondence when Israel & its supporters do not bend immediately to our demands. Keep this little girl in mind; keep justice in mind–& continue to tell the truth & demand an end to the slaughter.