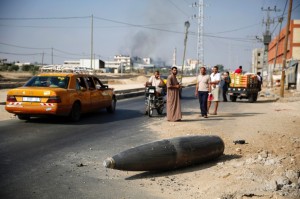 Just to be clear, this unexploded shell in Gaza is what Israel is dropping on homes, mosques, schools, hospitals, refugee centers hoping to take out all of Gaza’s children in the name of Exodus, the messianic mission invented by Hollywood scriptwriters which Zionists thought had become official history.

But bombs have a way of forcing truth to be heard. It isn’t that this time Israel went too far because they’ve been violently engaged in ethnic cleansing for over 66 years. It’s that this time, Palestinians laid the groundwork of understanding in the international movement of Boycott, Divestment, & Sanctions (BDS). There’s a historic shift against Israel & Andy Williams crooning The Exodus Song doesn’t cut it any more. Millions of people around the world know something isn’t stacking up in the explanations rendered.

After nearly four weeks of slaughter, many protesters feel overwhelmed by the odds against Gaza & they are monumental. Some ask, what’s the point of all those protests since Israel isn’t stopping the bombing? The Vietnamese gave best testimony to the power of massive public opposition & held the international antiwar movement in the highest esteem. Other exposures of US policy like the “Pentagon Papers” gave further testimony by revealing the US made no moves in Vietnam without gauging the antiwar response. You can’t stamp your foot a couple times & expect to bring tyranny to it’s knees. For that a sustained, relentless movement is required.

This is not the time to be daunted by the weight of Israel with a military arsenal supplied by the US & a propaganda arsenal by world media. The Palestinians haven’t let that stop intifada in 66 years of standing alone. So enough with the disillusionment, it’s time to organize. All out this weekend demanding “Stop the massacre in Gaza!”