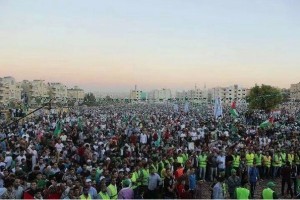 Israel’s been riding so high on that Exodus baloney they got reckless. They apparently thought they could make up any damn thing & it would be believed so they put the crackpots in charge of the hasbara factory. War propaganda went from nutty to kooky to outright insane–& that was just in the Knesset.

Zionism has produced massive psychosis in Israel, a cultural dry rot where politicians & bloggers call for genocide in Gaza without batting an eyelash; where women discuss if stuffing their faces with chocolate during this war will make them fat; where people move their parlor furniture to the hills of Sderot so they can cheer on ethnic cleansing & wave the Israeli flag.

For those who believe in social transformation, the corruption of Israeli society is not a promising sight but is deeply disturbing. What is heartening are the soldiers refusing to serve genocide in Gaza, the antiwar activists who stand with placards while they are denounced as traitors & attacked by goon squads as police stand by. To them our deepest respect for they are the only hope Israelis have. Many are discouraged at the odds against the dissidents. But those dissidents allied with Palestinians & African refugees are a formidable force–& that alliance is something the state of Israel will go to great lengths to prevent.

A historic shift has taken place internationally: hundreds of thousands of men & women of good will around the world have entered this conflict on the side of Palestinian justice. Those dissidents are no longer isolated; Palestinians no longer stand alone. These battalions are marching, speaking out, educating, agitating, & most of all evangelizing for the economic boycott (BDS) of all Israeli products. The contrast between the psychos in the hills of Sderot & the hundreds of thousands in the streets demanding “Stop the slaughter in Gaza!” could not be more regrettable from the point of view of Israeli war propaganda. Somebody from the hasbara factory should have been smart enough to go up to those hills, remove the furniture, & drag their bony asses home because it just doesn’t look good when people who claim they’re cowering from Hamas rockets are partying over ethnic cleansing.

The Zionist entity called Israel has to go. It isn’t salvageable nor is it reformable. That’s a daunting task but those who deem it impossible should have heard the jeremiads once so popular about the Soviet Union. Or the Roman Empire for that matter. What is needed is not another version of the two state scam where Israel stays put & Palestinians squat in refugee camps in bantustates. What is needed is justice & that means a democratic secular state where Jews & Palestinians can live in peace. Difficult? Indeed! Impossible? Absolutely not!

Palestinian justice is playing a transformative role in world history because it challenges centuries of racism, colonialism, & neoliberalism–the barbaric phase of capitalism. For those who ask, “What are the other Arab countries doing for Gaza?” the answer is two-fold: the other Arab regimes are mortgaged to the US Pentagon & have their heads stuck up Israel’s ass. But the people in those countries stand steadfast in their majority with Gaza. This is a photo of the Gaza solidarity rally in Amman, Jordan yesterday as part of Gaza Day of Rage.