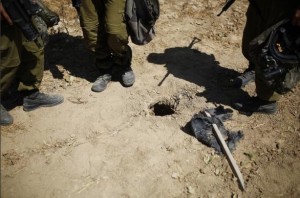 The camera may turn out to be Israel’s worst enemy. If there are any brains left in hasbara-land they need to confiscate all cameras, eject photojournalists from the occupied territories, & censor what gets published because the photos coming out are worth a thousand lies. This one might be worth a few laughs.

The caption to this photo said: “Israeli soldiers stand next to a hole in the ground they suspect is connected to a tunnel, outside the Gaza Strip August 10, 2014.” Now to the rest of us it looks like a rabbit hole. And if it connected to an alleged “attack tunnel”, what harm could it posssilby do? Can Hamas launch a rocket from that hole? Can a Hamas fighter squeeze through it to attack a kibbutz in Israel? Is this the only evidence they can provide of those “attack tunnels” which they used to justify the carpet bombing of Gaza?

Truth of the matter is Israel has no documentation of a single accusation against Hamas except a few 20-second grainy shots of un-repaired potholes which might just as well be taken in Des Moines, Iowa–& not after a tornado. When you visit the Zionist sites promoting these grainy shots it’s observable they’ve abandoned all their critical faculties to justify genocide in Gaza. That utter dishonesty & psychic fracturing is a regrettable thing to witness & in the long run is part of Israel’s undoing.

Continue to tweet photos of Israeli carnage in Gaza; continue to tell the truth about genocide in Gaza. Keep marching & evangelize for the economic boycott of Israel (barcode beginning 729).