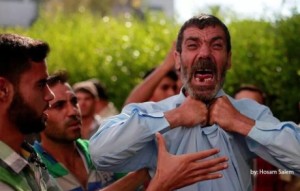 To say The Guardian (UK) newspaper is heads over US media isn’t very much flattery at all. Many amateur bloggers are as well. Without the Fourth Estate, there’s an entire class of well-educated ne’er-do-wells in both countries who’d be standing on street corners with tin cups. Instead they sing for their supper. The Guardian is an old newspaper that originated nearly 200 years ago in Manchester among non-conformist merchants & mill owners. Non-conformist does not mean radical but expressing a desire for a democratic press among the privileged middle classes. One working class paper referred to the Guardian as “the foul prostitute & dirty parasite of the worst portion of the mill-owners.” We don’t even want to know what that means.

It can be argued the paper has very useful coverage on a whole range of political subjects. But those who look to The Guardian for counsel on war, colonialism, or occupation are barking up the wrong tree. To cite only the more egregious of it’s views: it supported British occupation in Northern Ireland & defended British soldiers who shot down unarmed protesters in the Bloody Sunday massacre of 1972, claiming the IRA used protesters as human shields.

The Guardian also supported the US war against the “evil regime in Iraq” since it began in 1990 & agreed Iraq had to be disarmed of the fictional weapons of mass destruction.

In 1948, The Guardian supported the new state of Israel. C.P. Scott, the editor at that time had links to Zionism through his friendship with Chaim Weizmann, president of the British Zionist Federation & the World Zionist Organization, & later first president of Israel in 1949. That was then, this is now. But while articles now by Seumas Milne (a columnist & associate editor) call genocide in Gaza what it is, much of The Guardian coverage of Gaza has hasbara written all over it.

Now some are actually shocked The Guardian would agree to publish the scurrilous ad by Eely-Oily Weasel (known best by his stage name Elie Wiesel) accusing Palestinians of using their children as human shields, or “child sacrifice” as this former terrorist calls it. Weasel won the Nobel Peace Prize for lying & deserves an Oscar for his performance as grieving holocaust survivor. He draws on the Bible & the holocaust to make his odious imputations against Palestinian parents.

There was  a petition to The Guardian condemning The Guardian’s decision to publish Eely-Oily Weasel’s ad which garnered thousands of signatories.

Those who think Weasel wears a halo & fall for his phony tears ought to read the condemnation of Israeli ethnic cleansing in Gaza by dozens of holocaust survivors who recognize Zionism as a rancid devil’s brew of racism & colonialism. One of the most powerful indictments of Weasel’s ad is from a former officer in the Israeli military who doesn’t buy the sanctimony for one moment & excoriates that ad.Once again, we only intrude on this man’s grief in response to the odious lies of St. Weasel. This is the father of one of the four boys torpedoed to death on July 16th as they played football on the beach.