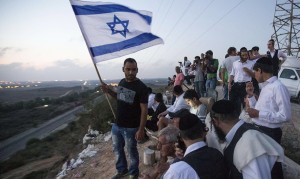 There never was a hay day for Zionism; from it’s inception it stunk of racism & supremacy. And not just ethnic supremacy but that based on gender & class. This obscene spectacle we see today on the hills of Sderot, where Israelis sit back in easy chairs to cheer ethnic cleansing, is not a degeneration but the full flowering of Zionist theoretics–if you want to call the tripe written by its founder Theodor Herzl theory.

In his plan for establishing Israel either in Palestine or Argentina he said, “The emigrants standing lowest in the economic scale will be slowly followed by those of a higher grade. Those who at this moment are living in despair will go first. They will be led by the mediocre intellects which we produce so superabundantly & which are persecuted everywhere.” The “mediocre intellects” must have comprised the paramilitary death squads whose leaders became eventual leaders of Israel–like Shimon Peres & Ariel Sharon.

Was it Herzl or another early Zionist thinker (using the word loosely) who said ‘When I see my first Israeli prostitute, I will know that Jews are free’? Real visionaries, these guys!

Many European Jews, beleaguered by pogroms & exhausted by the holocaust, must have hoped a state of their own could give respite from persecution. They paid a high price for credulity & falling for the hucksters of Zionism.

The ethnic cleansing of Gaza reflects a crisis in Israel which they’re trying to solve on the backs of Palestinians. Meanwhile Zion crumbles & millions around the world now know the vision of a Jewish-only, hermetically isolated state was rancid coming out the gate. It must be said: in the long run the Israeli state will have to be dismantled because it is built on hatred & supremacy. Herzl once used to exhort that a Jewish-only state was not a pipe dream; he probably didn’t know it would become a nightmare generating social hatred.

Palestinian intifada has offered the only solution that is a vision & a possibility: a democratic secular state where Jews & Palestinians can live together as brothers & sisters.

Support that vision by boycotting all Israeli products (barcode beginning 729); supporting the cultural boycott of Israel; & joining the growing international solidarity movement demanding “Stop the massacre in Gaza!” “No military aid to Israel!”