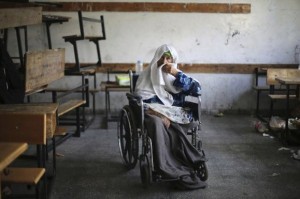 Netan-psycho-yahu belongs to that league of politicians who will forever stand in ignominy because the scale of their crimes is so immense & the very mention of their names sends shivers up our spines: Hitler, Stalin, Pinochet, Pol Pot, Omar Suleiman, Sisi, Kissinger. Netan-psycho thinks he’s riding high since he’s got Obama, Kerry, Harper, & Cameron in his back pocket defending Israeli genocide on the talk show rounds but one is more contemptible than the other.

Kerry expressed US commitment to Israel’s right to defend itself on Fox news &, not a bit squeamish, praised Netan-psycho for a “pinpointed” operation. Was he referring to the flechette shells employed by Israel? Flechette munitions are anti-personnel weapons fired by tanks which explode in the air & release thousands of small metal darts. Or is he referring to shrapnel coming from DIME explosives? Both weapons are flooding the hospitals, morgues, & streets of Gaza with bodies.

In a media interview, Netan-psycho once again accused Hamas, who he called “genocidal terrorists,” of using “civilians” as human shields. And in a statement that will forever shame his sorry ass, he said, “They use telegenically dead Palestinians for their cause. They want the more dead, the better.” We stand mute before such sociopathic hatred–which has become the hallmark of Zionism.

So where are the Palestinian Authority & the less than redoubtable Mahmoud Abbas in all this? And where is the UN–other than in opening abandoned schoolhouses in Gaza to accept refugees? Schoolhouses, it might be added, that are not off-limits to Israeli bombers. Abbas, Ban Ki-moon, Egypt’s al-Sisi, & Kerry are flying all over the place trying to come up with a cease fire plan. It’s the busy work of diplomacy without a shred of validity because the only peace plan worth a damn is a condemnation of Israeli ethnic cleansing & massive international diplomatic pressure on Israel to cease. But they cannot bring themselves to do that since they represent neoliberal business & political interests in the region & that means they support Israel. Maybe they’re getting a little squeamish about the lengths Israel is going to, maybe they’re afraid Israeli overkill will turn world opinion off the official Zionist narrative that has served them all so well for 66 years. But they will not turn their back on Israel–even as it self-destructs.

We hope the Guardian UK loses some of it’s patina as the voice of reasoned liberalism for it’s equivocations & worse on Israeli apartheid & ethnic cleansing. One writer complained about the volume of gruesome photos from Gaza inundating Twitter & social media. We understand her horror but she cannot hide that her squeamishness has more to do with covering for Israel than revulsion at its crimes.

We also think a steady barrage of mangled children, though intended to inspire justice, is not the best tool. So we post this photo of a wheelchair-bound women in Gaza who fled her house during Israel’s ground offensive & sought refuge in this bereft UN-run schoolhouse in Rafah. True, she’s not dead, but is she telegenic enough for Netan-psycho to justify continued barbarism?