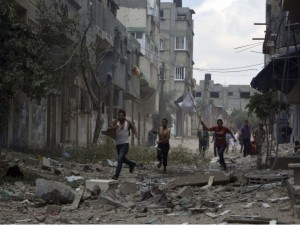 Palestinian men carrying a white flag, the symbol of truce & surrender, flee Israeli bombing during the brief ceasefire requested by rescue teams to retrieve the wounded & dead in the Shuja’iyya neighbourhood of Gaza City (July 20).

“There are no spaces for life. No place to return. All of Gaza bids farewell to herself every night & congratulates those who remain alive the morning of another day. They inspect their bodies, then run their hands over the living. They close their eyes then open them, & once again call the members of their families one by one…so that the memory of their names does not fail & their spirits do not disappear.”