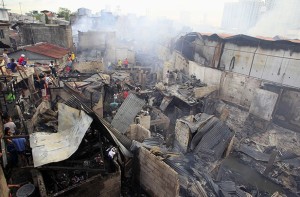 And yet another slum fire in Manila, Philippines! The fire yesterday was in Pasay City, a southern part of Manila bordering Manila Bay. The suburbs ringing the bay are under a massive redevelopment & gentrification program including business parks, IT & call centers, upscale shopping malls, resorts, sweatshop & free trade zones, & other infrastructure projects designed to attract investment. To facilitate that program, the Filipino regime has changed laws allowing public property to be privatized & requiring the forcible eviction of thousands of slum dwellers, making them homeless.

There are dozens of these slum fires every year in the Philippines, India, Bangladesh, Kenya, Nigeria, Cambodia, & many other countries & they are usually associated with attempts to forcibly evict residents. In the Philippines, slum residents have fought years of legal battles to prevent eviction because public housing & relocation sites are not provided so they would be forced into homelessness. Instead, the Filipino regime has simply sent demolition squads & bulldozers to raze the slums where thousands of people live.

Residents have not gone away obediently & without protest; there have been repeated street battles between residents & riot cops armed with tear gas, water cannons, & bulldozers. So it appears developers have decided arson is the better part of plunder & simply torch the shanty homes to avoid resistance. Officials always give the same explanation for hundreds of slum fires in major cities: a cooking accident, residents pirating power lines, flimsy, flammable building materials, or sometimes “cause unknown”. But there are similar patterns to the fires in every country: fire trucks are delayed in getting to the scene; fire inspectors can’t determine the cause of the conflagrations; many residents give cogent testimony supporting their suspicions the fires were arson; many fires were after mass eviction notices.

There have been hundred of fatalities in the fires, including small children, the elderly, & the disabled still at home while others worked. Many fires take place while people are still sleeping. Every fire leaves thousands homeless. In the Panay City fire which began before dawn, fire officials report four people were burned to death, including a pregnant woman & two children. An estimated 4,500 people were left homeless. Fire officials said the fire was due to flammable building materials but are still investigating the cause; residents alleged arson since the slum was slated for demolition next year. Arson for purposes of redevelopment & gentrification is the most credible explanation.

Housing is a human right & must become a central political demand in every country.

(Photo of fire in Panay City by Reuters)