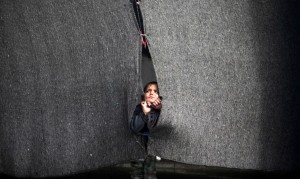 This Palestinian child peeks out from a makeshift tent at a UN-run school in Gaza where the family lives after losing their house during Israel’s ethnic cleansing binge in Gaza–what the Guardian-UK calls in the caption, “the 2014 conflict between Israel & Hamas.” According to the UN, the 51-day Israeli assault destroyed more than 96,000 homes, leaving 100,000 people homeless & living in unstable cement rubble. And still the UN needs a commission to identify war crimes!

Last October, about 50 countries met at a conference in Cairo & pledged $5.4 billion for reconstruction aid to Gaza. Government representatives must use these aid conferences to get together for poker since, as we know so well from Haiti & Afghanistan, most of the pledges are never delivered.

In addition, the Israeli blockade of Gaza does not allow necessary reconstruction materials & equipment to get past the apartheid barrier. Shouldn’t the UN be screaming bloody murder about that!? Shouldn’t they be accusing Israel of continuing ethnic cleansing by denying food, medical supplies, & rebuilding materials to Gaza? But the UN colluded with Israel & the traitorous Mahmoud Abbas of the Palestinian Authority by agreeing to give Israel a veto over building projects & supplies going into Gaza.

Israel claims they don’t want building supplies to fall into the hands of Hamas but of course, Hamas is just the all-purpose alibi for ethnic cleansing. Using that alibi, Israel has continued bombing sorties & tank fire against Gaza & just last week warned of a new military onslaught in Gaza.

There will be no massive reconstruction aid to Gaza, anymore than there has been to Haiti or Afghanistan. Israel has no intention of allowing Gaza to rebuild. That is the purpose of the blockade & the purpose of ethnic cleansing. And the UN is as culpable as Israel & the US, which bankrolls Israeli apartheid & ethnic cleansing.

Media hasn’t much reported the frequent protests in Gaza demanding reconstruction aid, since so many are homeless in winter. But political groups in Gaza have held several in the past months, with massive numbers demanding an immediate end to the blockade & the delivery of reconstruction aid.

This is where Palestinian solidarity groups play a vital role. We need to build forums, teach-ins, speak-outs, rallies to break the propaganda blockade in media; we need to build the hell out of the economic & cultural boycott of Israel; & we need to demand, “No aid of any kind to Israel!”. Solidarity means nothing if it stays in our heads. You can’t fight Israeli ethnic cleansing with good thoughts. Those many who cannot organize can contribute humanitarian aid for relief to Gaza.