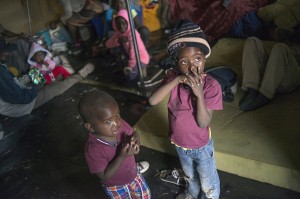 South Africa, with a population of about 50 million, has an estimated 5 million immigrants from African countries including Somalia, Ethiopia, Zimbabwe & Malawi, & including China & Pakistan. Many own shops or hawk goods on street corners & in markets.

Periodic outbreaks of anti-immigrant violence are attributed to high unemployment, widespread poverty & glaring social inequality. Some report the inequality is the worst in the world even after the end of apartheid but that ignominy is hard to gage in a world increasingly based on massive inequality everywhere. The plunge to the bottom is a competitive race & signals the need to get rid of neoliberalism, the barbaric phase of capitalism.

Nativist, xenophobic rhetoric & scapegoating immigrants is a divide & conquer strategy used by all regimes to deflect from systemic culpability for inequality & human misery. It may resonate in unique ways in South African society because of the history of apartheid but the only way to turn back the tsunamis of ethnocentrism & social division are to stand against it with power–& that is exactly what progressive forces in South Africa are doing with several protests in defense of immigrants.

The history of immigration policy around the world shows clearly that regimes collaborate in what can loosely be called “theorizing” policies & coordinating practices. In a world with a human history based on human migration, at some point capitalists realized what a useful & malignant purpose whipping up xenophobia could play in maintaining social control. If working people around the world don’t smarten up & defy this social engineering of conflict between us, it will prove our undoing. And the only way to smarten up is to do what South African activists are doing: hit the pavements in large numbers in a massive show of power. United we stand; divided we’re taken out like sitting ducks.

Photo is a tent at a refugee camp for immigrants fleeing the recent wave of violence against them in Primrose, South Africa. We stand in solidarity with them.