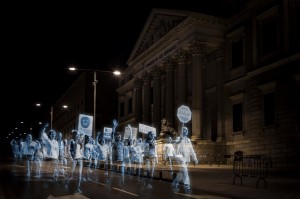 That PR ditty about “what happens in Vegas stays in Vegas” has zilch value when it comes to politics & international solidarity. This is an era of collaboration between ruling elites & what happens in one country is likely to happen in others. So the draconian reforms in two pieces of Spanish legislation should be of acute concern to activists everywhere. The proposed reforms to the Criminal Code & the Law on Public Security are a broadside assault on civil liberties including freedom of speech & assembly, due process, immigrant rights, & will introduce new definitions of terrorism that outlaw comments on social media which could be perceived as inciting others to violent acts.

It isn’t irrelevant that a central leader in the Popular Party voting in these “reforms” is a figure from Generalissimo Franco’s regime who should have been prosecuted instead of allowed to run free. What the Citizen Safety Law, denounced as the “Gag Act,” does is criminalize protest at a time when they are increasing in opposition to government austerity measures imposed by the IMF-EU.

The Gag Act (voted in last December & scheduled to go into affect July 1st)) will also legalize immediate expulsion without due process of immigrants & refugees from the North African enclaves of Ceuta & Melilla in violation of international human rights & refugee law. Linking civil liberties to immigration rights might not be the smartest maneuver the Spanish elite ever pulled because the destiny of immigrants is now linked to the future of democracy in Spain rather than pitted against each other. For immigration & human rights activists that makes political organizing much more coordinated because in every way democracy & immigrant rights form an indissoluble nexus. It’s no mere coincidence, for example, that attacks on immigrants (& on Black youth) in the US required shedding the US Bill of Rights. Obama signed the NDAA soon after, allowing indefinite detention of Americans without charges, just cause, or due process.

One form of protest to dramatize the meaning of the Gag Act was organized by a collective of activists from over 100 organizations. Using special technology they produced a virtual hologram protest outside the Spanish parliament in Madrid when under the Gag Act an actual protest would mean a fine of up to 30,000 euros (US$31,800). Organizers of such protests could be fined up to 600,000 euros ($634,100). Not to be daunted by repression & riot cops, in-person protests have been ongoing in over 30 different Spanish cities since the law was passed.

Our fullest solidarity with the democracy movement in Spain. Their struggle has everything to do with democratic rights around the world. May they kick tyranny, austerity, & repression from Iberia to the deepest levels of hell. The anti-fascist slogan of the Spanish Civil War was “No pasarán” meaning “They shall not pass.” That is again the battle cry of freedom.