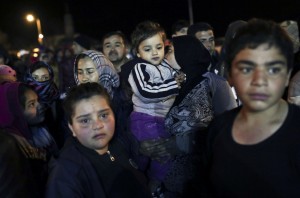 Increasingly, from the Mediterranean Sea to the Rio Grande River along the southern US border with Mexico, we are seeing children as the face of immigration. These anxious little ones are in Lesvos, Greece waiting to board a ship to Athens. Since Greece, as the first phalanx of European immigration, sealed up the land border with Turkey by building a barrier wall & enforced patrols, the undocumented fleeing war & poverty have been forced to take the treacherous sea route via the Greek islands.

SYRIZA came to power promising a more humane immigration policy but the European Union (EU) is certainly putting the screws on them to maintain the racist, xenophobic policies of the former regime. If the EU forces Greeks to choose between Frontex & human rights, it provides yet more compelling evidence the EU has outlasted its purpose on this planet.

Dump the EU! Dismantle Frontex! Immigration is a human right! Open the borders!