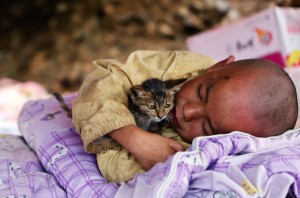 Xenophobia is inculcated into US kids & takes the most peculiar forms. Some forms are insidious & snide, some are extremely dangerous because they move so easily to war propaganda–but they are all ugly, demeaning things that help dehumanize other people–even the snooty French. Since childhood we were told other people don’t have household pets & don’t love animals like we do; they eat them. It’s such a curious charge when you examine the scope of animal abuse in this country, most notably by agribusiness & medical labs, or very evident at animal shelters.

Photojournalist accounts of floods, earthquakes, tornados show people from every corner of the earth risking life & limb to save their pets & not just their livestock.

Gaza has preempted all other news for a while now but there was a massive earthquake in Ludian, China on August 3rd, with a huge death, injury, & missing toll. How much of this is due to tectonic activity & how much to climate change is likely still being investigated by scientists. Those who sing for their supper will surely say it’s all tectonic till the earth crumbles beneath where they kneel in obeisance to power.

This child & kitten are in a shelter in the earthquake zone. Like everywhere, that interspecies love thing thrives.