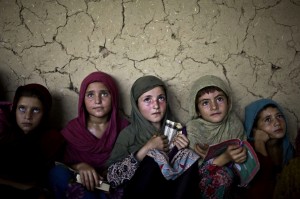 We cannot forget the other US-NATO wars in Afghanistan & Iraq which are every bit as barbaric as Israel in Gaza. But reporters in those countries are embedded up the butt of US militarism so by the time we get the news it’s all been sanitized & made humanitarian. US justifications for these wars have been as shifting & inventive as those Israel uses in Gaza. Despite the lies & the sanitized reports, a majority of people in the US oppose those wars; if they were aware of the barbarism employed, they might actively do so. Because if there is one thing for certain, massive public opposition to war scares the hell out of the warmakers, no matter how hard they feign otherwise. Hundreds of people in the streets look too much like revolution.

US-NATO drone sorties have increased over Afghanistan to now hundreds a day while Obama blithers deceits about winding down the war. Many, especially Zionists, have pounced on the hundreds of thousands of Palestinian supporters & berated us for not standing against Assad in Syria, which they claim is a far more important struggle. It is an important struggle rendered hopelessly confusing not just by media war mongering but by the mangled analyses of competing leftist groups. What’s telling is that the sanctimonious never mention Afghanistan or Iraq. The only reason Zionists taunt Syria is not to defend the revolution against Assad’s tyranny but to take attention & support away from Gaza. It’s a switch & bait trick & not a very impressive one, but then Zionism draws on the cesspool of 19th century racism & colonialism for its inspiration.

The antiwar movement against war in Afghanistan & Iraq (& for that matter, Pakistan, Uganda, Somalia, Yemen) has been weak for a long time–at least since the Gulf War. But the antiwar movement made up of students, church groups, veteran groups, & activists of all kinds can’t conceive of putting Palestinian solidarity at odds with the struggle against war elsewhere. In fact, in the US & elsewhere, the most active builders of Palestinian solidarity have been antiwar activists. Because the children of Palestine, Afghanistan, Iraq, & everywhere else are bound together by a common humanity & by a profound nexus of economic, social, & political relationships. That’s what solidarity is all about–not pitting those being bombed in one country against those being bombed in another.

One thing is certain, the US Pentagon has every reason to be concerned about the massive opposition to Israeli ethnic cleansing & support for Palestinians. Not only does it unsettle their neoliberal plans for Israel as a police fortress in the Middle East, but it means their other wars in the region will come under closer scrutiny & face greater public opposition.

These children are Afghan refugees in Islamabad, Pakistan listening to their teacher at an Islamic school. Given their age & the duration of US occupation in Afghanistan, they may very well have been born in Pakistan.

US out of Afghanistan! US out of Iraq! End all military aid to Israel!