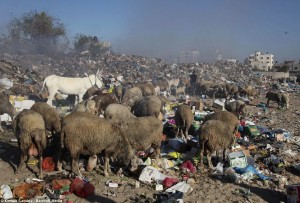 One has to have a Jesuitical bent of mind to parse all the ceasefire proposals that have now been offered to Israel. We leave that nonsense to legal scholars cause there ain’t no peace in any of those proposals. In the diplomatic shell game, there are proposals from the UN Security Council; the Kerry-Obama gang; Cairo (which is currently persecuting Muslim Brotherhood members who have political affinity with Hamas); Qatar & Turkey, which includes participation of Mahmoud Abbas (who should have been on trial for treason in Palestine even before the onset of this phase of Operation Ethnic Cleansing). This is all a diplomatic charade which will not bring even an iota of justice to Gaza; which will not force Israel to stop bombing or give up the occupation of Gaza; & will not end the economic blockade of Gaza. So there’s nothing in it for Palestinians. The game is rigged to make Hamas appear unreasonable when it rejects diplomatic grandstanding & demands the minimum of justice.

We say proposals offered to Israel because Israel is the sole aggressor despite repeated claims that Israel only breached the latest phony ceasefire to retaliate when Hamas let off rockets–which they still cannot produce evidence for. They attribute the lack of evidence to the Iron Dome anti-rocket system. (Israel’s got an answer for everything.) But if the Iron Dome system is so effective, why in the hell is Hamas any problem at all to Israel? Why does Israel have to bomb alleged rocket bunkers in homes, schools, hospitals, markets, refugee centers if it has a system that can take those rockets down? And why in the hell would Hamas continue to launch rockets that don’t get past the apartheid wall?

Major media like the NY Times have all sorts of sources & stringers to determine the truth about these ceasefires–who’s breaching the agreements & how? The Jerusalem Fund, a Palestinian advocacy group in Washington DC, did a study of the ceasefire breaches & media coverage & found that in the period from November 2012 to July 2014, Israel committed 120 ceasefire violations, often involving Palestinian deaths, but the NY Times only reported 17 of these–& when they were reported, it is always as justified retaliation for Hamas rockets. One can question the objectivity of a Palestinian advocacy group when they accuse media of systematic failure to cover Israeli ceasefire violations but then you have to ask why the media doesn’t do it’s own investigation if it wants to report reliably rather than peddle propaganda.

Now is there any substance to the melodrama played out between Netan-psycho-yahu & the Obama-Kerry operation? Is there really five years of bad chemistry between Netan-psycho & Obama, as a Haaretz writer claims? Is Kerry a diplomatic blunderbuss or driven by “misplaced obsession & messianic fervor” to get peace as the Israeli defense minister claims? Is Obama really second-guessing Netan-psycho on Hamas? Did the US & Israel have a falling out over the ban of US flights (which lasted about half an hour)? One day Obama is reported enraged at Israel; the next day Netan-psycho is extremely furious & this little psychodrama gets played out in the media over & over again. Zionist media really get into this drama & take great umbrage at every supposed rebuff of Israel. But the truth of the matter is artillery talks louder than hissy fits. The US continues to bankroll Israel, including millions in weaponry for Operation Ethnic Cleansing in Gaza. The relationship between Israel & the US may be portrayed like a bad marriage but it is rooted in colonialism & neoliberal plunder & hasn’t a damn thing to do with bad chemistry.

If the US isn’t sweating Israeli overkill in Gaza it better start fast because the barbaric assault on Gaza has undone over 66 years of methodically orchestrated Exodus propaganda. Unsustainable contradictions within Israeli society compel it headlong & are unraveling the devil’s bargain Zionism made with colonialism. There’s a lot at stake for neoliberal colonialism in the MIddle East & Zionism, bankrolled as the guardian of that stake, is blowing it out of the water.

The only viable peace plan is the one proposed by Palestinians themselves & supported by hundreds of thousands of men & women around the world. For justice, there’s a whole list of demands but for now these will suffice: Stop the massacre & end the blockade of Gaza!

Gaza today looks like the apocalypse has been & gone. Here shepherds tend their flocks scavenging food in a dump site with bombed out buildings in the background.