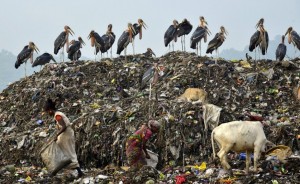 Today is World Environment Day called by the UN every year since 1976. Celebrity UN ambassadors will be out, earth anthems will be sung, school children will hold drawing contests on this years theme of ‘the fight against the illegal trade in wildlife’–even though there isn’t a damn thing school children can do to stop poachers in a trade estimated at US$50 billion to $150 billion per year (& if you include fish wildlife, US$10-23.5 billion more a year).

Illegal trade in animals, plants (including timber & charcoal), & fish is one of the largest criminal enterprises in the world along side trafficking in drugs, people, & arms. The environmental consequences on animal life & human society are incalculable. The black market value in all enterprises is estimated at US$1.81 trillion. That’s what kind of a world we live in.

Of course under neoliberalism, the barbaric phase of capitalism, it’s often impossible to distinguish criminal enterprises from legal businesses. One of the places that’s most evident is in global waste management systems. The IMF/World Bank economic model requires privatizing waste management which has resulted in monstrosities like this all over the world: toxic, stinking mountains of plastic & metal detritus, putrid food waste, animal & human poop, & countless other rotting, disease-ridden unmentionables.

The IMF waste management system involves the poor, including children, working these festering mountains for recyclables which they resell for a few bucks a day. As a result, they suffer numerous health problems, including skin & respiratory infections. Since neoliberalism also requires privatized healthcare, many cannot receive the medicines required for their conditions. That’s what kind of world we live in.

This dump site in Guwahati city, Assam, India is taking over wetlands & the habitats of these Greater Adjutant Storks so that their numbers are gradually declining. That nightmare is repeated at dumpsites around the world.

IMF leaders recently conceded that neoliberal capitalism is a failure. That’s beyond dispute. But they’ve so heavily & systemically invested in those methods of plunder & economic colonialism since the 1980s that some of the environmental damage they’ve wreaked is beyond repair or will take generations to undo–like the oceans filled with oil slicks, swirling vortices of plastic detritus, & wildlife depletion. Of course they have no intention of reforming the system of plunder for profit & couldn’t if they wanted to.

The lessons that need to be taught school children about the environment will not be forthcoming. There will be moralizing & sentimentality about Mother Earth but no elaboration of the real causes of climate change & environmental wreckage. That’s our job because that’s what kind of world we live in & it is not suitable for human, animal, or vegetative life.