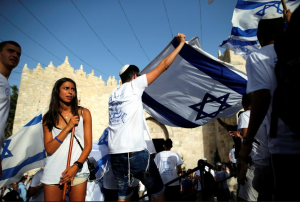 Remember last September & October when Palestinians, with women on the front line (because men were barred by Israel), were trying to defend Al Aqsa Mosque from Israeli aggressions & vandalism? When all Palestinians (& no longer just men under 50) were barred from praying in their own mosque but Israelis & tourists were allowed to tour the complex? When Israel deployed storm troopers at the mosque? And when Israeli apologists began the slanders about a “knifing Intifada”?

Do you remember how Israel & its media valets insisted that Israel intended no changes in the status of the mosque? That such fears were merely paranoia on the part of Palestinians?

Then Israel declared martial law in East Jerusalem, including the Old City where the Al Aqsa complex is located. Of course East Jerusalem had already been under illegal occupation by Israel since the 1967 war.

So how do those apologists for Israeli colonialism & its media minions explain this photo with this caption by Reuters?:

You can interpret that any way you like, but it sounds like a de facto change in status for East Jerusalem, just like an annexation, a colonial acquisition, a land grab of Palestinian territory, & usurpation of Palestinian sovereignty.

Palestinians have a right to defend East Jerusalem & the Al Aqsa Mosque complex by any means necessary. Men & women of good will around the world are called upon to defend them against Israeli colonialism & aggression.

Build the economic, cultural, & academic boycott of Israel as a first line of defense for Palestinian self-determination & justice.