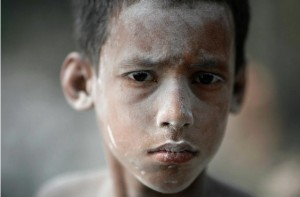 There’s some economic news coming out of the World Bank (WB) that many may have missed.  As of October 2015, the World Bank raised the new global poverty line from USD$1.25 a day to $1.90 a day.

The increase is the World Bank’s version of a cost-of-living adjustment except that they say the $1.90 was set using 2011 prices. Why not 2015 prices? Or those of 1892? Originally, starting in 1990, the World Bank had set the poverty line at USD$1.00 a day & increased it to $1.25 in 2008. The problem of course is that it doesn’t make a lick of sense by any measure of economic well-being. In any country in the world, you could earn double or triple the official poverty line & you would still be living in miserable conditions.

In their FAQ sheet on the increase, the WB said over 900 million people globally lived in extreme poverty under the poverty line in 2012 & projected that would decrease to 700 million by 2015. What the hell does that mean? What do you do with that kind of information?

This idiotic measure of poverty has nothing to do with quality of life for poor working people & everything to do with the World Bank’s political manipulations of poverty. The WB exists & works in collusion with the IMF to enrich & promote neoliberal multinational mining & agribusiness enterprises expropriating millions of farmers & agricultural workers. It imposes austerity conditions on countries that ravage social services like health care, education, social services for elderly, infirm, & disabled, makes millions homeless, & creates massive child labor. The WB is a key operator in the impoverishment of millions of people on every continent & doesn’t give a rat’s ass about what happens to them. African refugees can give volumes of testimony on that score. Witness Greece, Spain, Portugal, Brazil, Mexico, India, Myanmar, a good share of Latin America, & all of Central America.

In contrast, Jim Yong Kim, the current WB president earns $848,542 a year in salary ($476,360) & benefits ($372,182). Economists at the WB earn $124,000 a year; consultants earn $45 an hour, interns $23 an hour. This is the “let them eat cake” mentality writ larger than grotesque. Are analysts in the top strata of earners in the entire world really suitable to the task or capable of understanding grinding poverty? Can they possibly give a damn except with some twisted sense of pity or noblesse oblige? Who in their right minds can consider $1.90 ($64.60 a month) the poverty line when it’s not even close to what is required in any country to live a worthy life?

This little guy is 7-year-old Czoton, a worker in a balloon factory in Dhaka, Bangladesh. He’s one of those living under the official poverty line. Balloon workers earn between $10 to $25 a month. The imaginary poverty line doesn’t mean squat to him or his fellow workers. And it doesn’t to anyone without the political purpose of justifying poverty.

(Photo of Czoton is from 2009; photographer unidentified)

As a postscript: It’s of considerable interest that our man Kim, who is a medical doctor, was a cofounder of Partners in Health (PIH) with Dr. Paul Farmer–because it’s not irrelevant to how the ruling elite manage poverty, it should be noted that Farmer has created quite a humanitarian PR image of himself & the work of PIH which many Haitian & human rights activists challenge.

In 2009, he was named UN Deputy Special Envoy to Haiti serving under Bill Clinton as UN Special Envoy. That would explain why the good doctor with a heart reeking of compassion never made a peep when the UN rejected compensation claims from victims of the cholera epidemic brought to Haiti by UN occupying troops. It doesn’t explain why Farmer didn’t object to Clinton’s collaborations with former dictator Duvalier or with president & former terrorist Michel Martelly; didn’t object when both Clintons operated as Obama’s agents to turn Haiti into a sweatshop haven; or didn’t notice the Clinton Foundation wasn’t delivering anything for the millions in donations it received. Is the good doctor stupid or has he been corrupted?