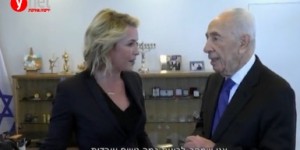 Chelsea Handler tries to compensate for her banal comedic talents by grandstanding–like sitting on a camel topless except for Star of David pasties while on a visit to Israel.

Handler visited Israel in January 2015 ‘to explore her Jewish roots” for a personal documentary & referred to Israel as her “homeland.” While there, she did the obligatory photo op with Shimon Peres. There’s a problem with that narrative. Handler was raised in Livingston, New Jersey & has zilch relationship to Israel. Her American father was Jewish & her German-born mother was the daughter of a Nazi. How does that make Israel her homeland? Does she identify with storm troopers?

Handler portrays herself as a blunt-spoken liberal but now that she’s adopted Israeli apartheid, she’s talking the talk. Last Saturday, on an episode of her Netflix show “Chelsea Does,” she said, “This is not a popular thing to say, but if Muslims are primarily the people that are blowing up planes, then I would like the TSA to be searching Muslims before I get on a plane.” When millions of people are watching your show, you ought to try not to talk stupid. Can she point to a single incident of a Muslim blowing up a plane?

It’s regrettable when you fritter away your meager talents like Bill Maher did before you–by peddling prejudice, stupidity, & social hatred & trying to make it seem just honest humor.

(Photo is Handler with Peres)