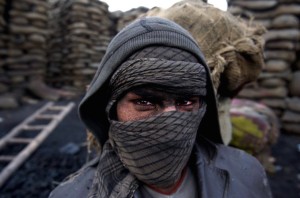 If eyes are the window to the soul, these would be the very soul of long-suffering–& perhaps of hopelessness too. This very young Afghan man is a coal worker in Kabul working outdoors on a dangerous, unhealthy job during a bitterly cold winter.

Some philosophies talk about cultural differences as though they were impenetrable & made solidarity between human beings impossible. But anyone of any culture who’s worked a dead-end, low-paying, miserable job like this, with no rights & no future, knows exactly how this man feels. He’s one of ours.

A lot of people, especially those who haven’t read him, disagree with Karl Marx. But one indisputable thing he advised is “working people of the world unite.” Pity isn’t what this fellow deserves but our deepest respect because in solidarity with others he has the power to change the world.