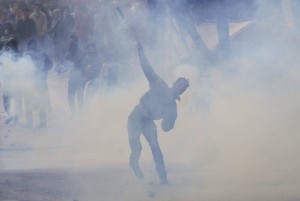 Kashmir, the other Intifada: this protester in Srinagar is tossing an exploded tear gas shell back at Indian troops trying to disperse a protest yesterday against the arrest of independence leaders & activists. Just like in occupied Palestinian territory, the democratic right of protest is violently repressed with military aggression. Meanwhile Israel & India extol themselves as strong democracies.

A Guardian-UK photo showed an Indian soldier using a sling shot against protesters but the Guardian is going over to the dark side when it comes to Intifada in Kashmir & Palestinian territory. Indian troops in fact rely on tear gas, rubber bullets, pellet guns, summary execution.

Now to discredit the Kashmiri movement for self-determination, the Indian Army is floating alerts about ISIS infiltrating the resistance movement. Will ISIS operatives be joining the stone-throwers who dominate Kashmiri resistance or will they come with tanks & Humvees supplied from Saudi Arabia & China?