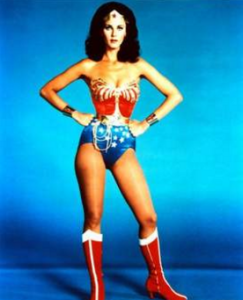 Lynda Carter, who played Wonder Woman on the TV series (1975-79), was interviewed on morning news about the UN choosing the comic book super hero as its honorary ambassador, following the tenures of Tinker Bell & Winnie the Pooh.

Carter espouses the peculiar version of feminism where sexual exhibitionism is empowerment & was offended by feminist objections to the UN booby prize (no pun intended). She said Wonder Woman is a visceral part of every woman, she’s our role model, our inspiration. Yeah well, not for women of my generation who grew up with that Barbie Doll mockery of the sacred feminine that needs no grotesque exaggerations: no big hair, no bowling ball-sized breasts, no baby voice. A Barbie Doll that kicks ass is still a caricature of how women do political power.

Check out movies from the 1950s, like old Elvis movies, to see the version of woman we were taught to model & that end up in house-dresses, not so much domestic goddess or wonder woman as scullery maid.

Photo is Lynda Carter as Wonder Woman. How empowering is a cartoon caricature? The UN can stuff it.