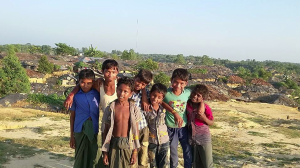 These little kids are Rohingya refugees who live in an unregistered refugee settlement at Kutupalong in the Cox’s Bazaar district in south Bangladesh. Being unregistered means receiving no assistance from the UN refugee agency (UNHCR). The Bangladeshi government denies the majority of Rohingya the right to register as refugees as well as access to international humanitarian assistance from agencies other than UNHCR.

UNHCR reports they are providing assistance to just over 32,000 registered refugees living in two official camps at Kutupalong & Nayapara. The problem is there are an estimated 200,000 to 500,000 Rohingya living in Bangladesh, most of whom live in deplorable conditions in makeshift, overcrowded, unregistered settlements near the two official camps.

Anti-Rohingya sentiment among Bangladeshi communities near the camps is stoked by resentment that refugees receive food & other aid not available to poor citizens & that Rohingya necessarily work in the informal economy at lower wages. This resentment has led to violent attacks on Rohingya, including rape, & a state of heightened insecurity & anxiety in the camps. The prejudices parallel those against undocumented immigrants in most countries which are less grounded in reality than in orchestrated campaigns of divide & conquer.

This wonderful photo is from the album of Mohammed Imran, an elected refugee representative. He explained that these little guys do not go to school–although they want to–& some of them work as child laborers.

This intolerable situation will not end without the battalions of international solidarity standing steadfast with the Rohingya in their demands to end persecution & genocide in Myanmar & for refugee rights in Bangladesh, Malaysia, Indonesia, & elsewhere.