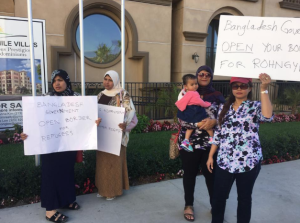 And so, led by Rohingya in exile, the battalions of international solidarity have begun to assemble. Small in numbers now, they must soon become massive.

The top photo is a protest in Sydney, Australia against the current violent crackdown on Rohingya in Arakan State, Myanmar & against Australia’s barbaric refugee policies; the bottom is from the rally in Los Angeles, USA.

Were it not for social media, we would not know of these significant events. It is not the size that determines their importance but that for the first time, the genocide of Rohingya is no longer Burma’s dirty little secret fronted by Aung San Suu Kyi & her Nobel Peace Prize. All countries doing business in the country will now be held accountable as part of the genocide. Something fundamental has changed for Rohingya justice since 2012.

End the genocide of Rohingya in Myanmar. Full refugee rights for those displaced in the violence.