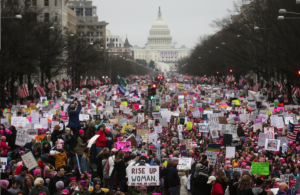 There will be hundreds of thousands of women marching today & tomorrow across the US & in countries on every continent for the Women’s March 2018. Last year, between three & four million women marched on every continent raising countless specific demands related to the struggle for women’s rights. Since the organizers of the events in the US are associated with the Democratic Party, including Linda Sarsour, they have again raised no specific political demands but have titled the march “Power to the Polls” & focused the US marches on getting women to register to vote for one of the two bankrupt major parties.

No one owns those women’s marches & no one can suppress the voices of those who think the electoral arena too corrupt & constrained to address women’s oppression. No one can stop protesters from showing up in contingents with placards raising concrete demands against war, occupation, genocide–even specifically addressing Palestinians, Kashmiris, Rohingya, Syrians, Afghans, Iraqis– along with demands for women’s reproductive freedom, against impunity for sexual assault, for immigrant & refugee rights–all of which are women’s issues.

This is our movement & the Democratic Party has no rights to determine or limit its political focus–even in the US. The movement dictates to government & politicians; not the other way around.