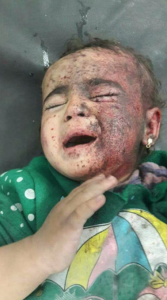 Who knew there were so many forensics experts & crime scene investigators among Assad supporters!? Not to mention so many fake news & photoshop analysts. They’re storming social media trying to discredit the photos of the Syrian refugees who froze to death on the Syria-Lebanon border & they are doing so only because they cannot blame the bombing of civilians in eastern Ghouta & Idlib on US coalition war planes. In their twisted political mentality, it is righteous for Syria & Russia to bomb civilians & only barbarism if the US does so. They have abandoned principled politics & made a mockery of political morality.

Some of them are too far cooked to hold out hope they will retreat from such amoral unprincipled politics. We nevertheless hold out hope that many will rethink such stinking mendacity & political amorality & return to opposing the bombing of civilians by any country.