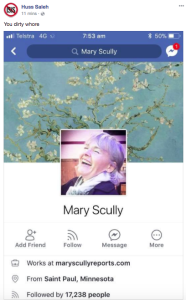 Posted to show the level of political discourse employed in defense of Assad’s national sovereignty & his secular right to torture & hang political prisoners, forcibly disappear political dissidents, bomb & gas Syrian civilians. This was posted on an Assad supporter’s wall after he called me a “dirty whore” on one of my posts about Assad. The political rancidity of Assadism speaks for itself. The only thing they’re packing in defense of tyranny is hate & amorality.