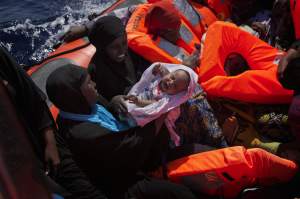 These women & infant from Nigeria were rescued about 17 miles off the coast of Libya trying to get to the island of Lampedusa where there is a refugee processing center. We are not informed who rescued them nor where they were taken since Lampedusa is still at least 200 kilometers away. Our hopes are they were rescued by humanitarian groups that will do the right thing & deliver them safely to Lampedusa.

Throughout the refugee crises of the past several years, the mayor & residents of Lampedusa have distinguished themselves from the Italian government by their hospitality & welcome to refugees. They witnessed & reported that the Italian Coast Guard allowed refugees to drown off their coast & excoriated the Italian government for its barbaric immigration policies, including dumping drowned refugees in unmarked graves in Sicily & not allowing family members to be part of funeral services.