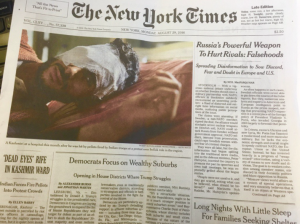 Kashmiri activists worked tirelessly on social media for a long time to get information about their struggle against occupation & for self-determination past the media news blackout that prevailed for years. That is certainly one of the reasons the Indian government locked down the internet & cell phone communication when their brutal siege began 52 days ago on July 9th.

Yesterday, the Indian army’s use of pellet munitions made front page news in the New York Times. On social media, Kashmiris living outside the country & others educated by Kashmiris before they were locked out are posting daily about the Kashmiri political movement & about the violence of India in Kashmir. In other words, the groundwork laid by indefatigable, if not also badgering, Kashmiri activists is proving invaluable in getting more media attention & in international solidarity from human rights activists.

Stripping away the niceties & interpreting his diplomacy in straightforward language, Ram Madhav, the leading Indian politician for Kashmir told Indian media yesterday that the Modi regime was “taken by surprise” by the scale of resistance in Kashmir & rejected the idea that massive daily protests were incited by the death squad execution of Burhan Wani, the man whose name cannot be mentioned on FB without adding a treatise denouncing terrorism. That denunciation of Indian terrorism is forthcoming.

What surprised our man Madhav is that with the exception of pellet guns, the Indian army & death squads routinely subject Kashmiris to extreme violence–not just summary execution but mass disappearances, torture, mass rapes, incarceration, mass graves. So why the international outrage over pellet guns? Thus are the confusions of a mind warped & stunted by nationalism.

Madhav dragged out the usual shibboleth blaming the current siege of violence by the Indian occupying army on “Pakistan-backed forces” & agents provocateurs. He didn’t address why Kashmiris are so confused about who it is that is shooting at them, blinding, disabling, & killing their children.

What matters are not the diplomatic obfuscations of the Indian government but the fact that Kashmiri activists have educated so many & broadened support for their struggle & that at long last they have broken the news blackout.