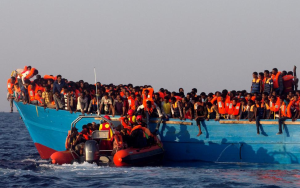 This is how badly refugees from African countries want to get the hell out of Libya, now a war zone between US special forces & ISIS–the poisoned fruit of the 2011 US-NATO war. It began with a No Fly Zone & turned the country into a killing field.

The rescue boat here off the coast of Libya is not from one of the several European navies patrolling against refugees but is from the Spanish NGO Proactiva. The refugees are from Eritrea fleeing a dictatorship with a horrific human rights record.

It is not reported whether they were returned to the hellhole that is Libya or taken to Lampedusa.