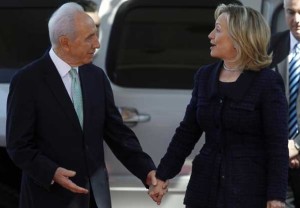 The remarkable Israeli journalist, Gideon Levy, wrote an article in Haaretz last November after Hillary Clinton published her groveling, money-grubbing love letter to Israel. The article titled “Hillary Clinton is No Friend of Israel” is an iteration of the long-held anti-Zionist view that a Jewish-only state in Palestine is a death trap for Jews, not a sanctuary from persecution & pogroms.

In the article, Levy asks: “What happened to the Hillary Rodham Clinton who in her youth fought for civil rights & against the Vietnam War, & as a lawyer specialized in children’s rights? Did she not hear what her dream state is doing to Palestinian children? What happened to the glorious career woman who was considered liberal & justice-seeking on her way up? Did she forget it all? Does money buy everything? Or, when it comes to Israel, do all principles suddenly change?”

No one will fault Levy for getting Clinton’s political biography all wrong. But until it became advantageous to misrepresent her youthful politics, it was evident that Clinton was always a conservative ideologue. There is not a shred of evidence she ever participated in the civil rights or anti-Vietnam War movement & considerable evidence to the contrary. Nor was she ever a part of the feminist movement except as an elite participant involved in demobilizing it as a social movement & making it an expedience to be manipulated & coopted to serve US foreign policy.

Levy’s article really raises the broader question of why all US politicians have to vow obeisance to Israel, a foreign country–& not just US politicians, but from around the world. What mesmeric makes a small colonial settler state so vital? We can dispense with any illusions that governments give a rat’s ass about freedom of Jews from persecution. Racisms & colonialisms of every kind are essential to the very matrix of the modern capitalist system. It couldn’t function without marginalizing & demonizing millions of people–& ethnicity, gender, & skin hue are the easiest ways to do that.

One reason, of course, is that Israel is a linchpin to control over the Middle East, serving as a military fortress to hold back the spread of democracy. That was played out mightily in the Egyptian uprising of 2011 where the Egyptian people wanted to advance solidarity with Palestinians but were violently thwarted by the machinations of the military junta backed by US militarism–brokered by then Secretary of State Hillary Clinton.

Israel also serves to legitimize colonialism which is coming back with a vengeance under neoliberalism, the barbaric phase of capitalism. Israel, which calls itself “the only democracy in the Middle East,” might give a kinder, gentler face to colonialism & apartheid if it weren’t so barbaric with bombing Gaza & expropriating Palestinian lands in the West Bank to hand over to Jewish settlers from all over Kingdom Come.

Honoring & building the economic, cultural, & academic boycott of Israel can help build the bonds of solidarity necessary for peace & democracy. Buy nothing with a barcode beginning 729.

This photo is the obligatory photo op of Clinton with Israeli terrorist & former president Shimon Peres taken last year after her groveling professions of love.